Calm modernism is out and anarchic forms are in at this year's Design Miami collectors' fair, as designers respond to tumultuous political times.

The fair, which for the last few years has been dominated by mid-century French and vintage furniture, is this time stuffed with more experimental pieces.

"Because of the political climate, people just decided to go all in," said Garcia Mosqueda. "That means more attitude in design, more expressionism in design, pushing for ideas that are beyond functionalism. It means less of this idea of utopian modernism."

Design Miami opens to the public today and runs until 5 December. The most talked-about piece at the preview yesterday was Scrappy Cabinet, a sideboard fashioned from trash by young New York designer Misha Kahn, presented by Friedman Benda gallery.

Paul Johnson of New York gallery Salon 94 said that designers and gallerists were reacting both to the political climate of Brexit and Donald Trump's victory in the US presidential election, and the somewhat staid state of the fair over the past few years.

"There was a need for a change and a lot of people felt it," said Johnson. "It was just so static." Past Design Miami fairs have been dominated by figures from the past including mid-century architects Jean Prouve and Charlotte Perriand.

"All the French stuff, same same same, so I think this year was more of a reaction to that," Johnson said.

At Design Miami this year, Salon 94 is presenting a range of highly expressive pieces by Italian designer Gaetano Pesce, including vintage cabinets and new plastic vases commissioned for the show.

"The design world needs something crazy right now," Johnson added. "It's inherent in the times. It comes from somewhere else. Nobody was talking about it or planning it – it just happened."

Design Miami's executive director Rodman Primack agreed, saying the committee that approves what gets shown at the fair had sensed a change of direction this year.

"I don't think it's deliberate at all but I think that the anxieties of the last year infect the way we think fundamentally," he said. "So when the gallery committee comes together and looks at stuff there's a collective consciousness in the decision making. You move in a direction because you're feeling things."

Primack said that while the balance between old and new work has not shifted dramatically, the fair has been redesigned to give greater prominence to contemporary work and less to booths showing mid-century design, adding to the sense that change is in the air.

"On the contemporary side, designers like Misha Khan are going for this really pop, expressive thing, which I also think is a response to feeling too boxed in by culture and society," Primack said. "I think we're going to see even more of it now with these shifts with Brexit, with Trump, all these political shifts that seem to be pulling us really far to the right."

This was coupled with a sense that the mid-century revival has run its course and people are looking for something new, Primack added.

"Mid-century French has now become the median, the starting point for so many people and for aesthetics, when we look at magazines, at houses, what people want to live with," he said. "Ten years ago it didn't look like that but today the starting point, the basic aspiration for so many people is to have a very chic interior with a Jean Royère sofa and Le Corbusier Chandigarh chairs.

"Now a lot of people are saying, okay I did that now, now I want to mix it up, screw it up with some crazy Misha Khan lights."

"We're not living in modernistic times," added Job Smeets of Studio Job, which has been producing highly decorative work for years but with this week unveiled perhaps its wildest creation yet – a painted bronze statue located outside the Faena Forum in Miami Beach featuring a castle trapped in the branches of a tree.

"I wish I could be a modernist," Smeets said. "I love modernism. But it doesn't fit the times. Things are getting more and more shameless, more free, less boundaries. Twenty years ago designers were still seeing IKEA as their icon. I'm really happy that that's shifting."

"One of the possible bright sides is that whenever there's political unease and social pressure, architects and designers respond in really great ways and so maybe one of the positive after-effects of this situation is having really interesting design and art coming out of it," Primack added. "It feels like we're entering a tunnel and we really need artists and designers to light the way." 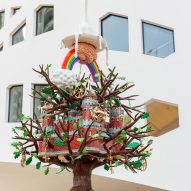