Visitors to OMA's new Faena Forum in Miami are greeted by an eight-metre-tall tree depicting an array of memories and thoughts by Studio Job.

Unveiled yesterday as part of Design Miami, the Tree of Life will remain a permanent installation outside OMA's cylindrical addition to the Miami Beach coastline.

It is the latest work in an ongoing collaboration between Faena Group partners and Studio Job, which previously saw the Belgian duo install a roller disco inside the Faena Art Center in Buenos Aires.

The totemic sculpture is modelled on a European oak tree, with each section interpreting a memory or thought.

The trunk of the tree splits around a globe, while a castle is hidden within its leafy branches. At the top of the sculpture, a golden jug is pouring milk over a cowboy's hat that covers a brain and a rainbow.

The sculpture is made from a number of materials – like bronze, aluminium, rare marble, crystals and mosaic. The craftsmanship behind it "pays homage" to a 17th-century goldsmith named Johann Melchior Dinglinger.

"Tree of Life pays homage to one of Europe's greatest goldsmiths at that time, Johann Melchior Dinglinger, honouring the bizarre renaissance days of the 17th century when the elector of Saxony, known as August the Strong, ruled," said Job Smeets.

"The piece is an important centrepiece in our lifelong practice of extreme craftsmanship and we were inspired to bring a contemporary take on these historic techniques."

A number of processes – including grinding, welding, polishing, gilding, silvering and hand painting – were adapted by the studio to make the piece resistant to the coastline's weather conditions.

Studio Job, led by designers Job Smeets and Nynke Tynagel, is known for its fantastical and often autobiographical pieces.

A former couple, Tynagel and Smeets once crafted a coffee table that symbolised their break-up as a head-on collision between two steam trains.

Design Miami runs from 30 November to 4 December 2016. Other projects on show include a collection of faceted concrete street furniture and a fast-food concept for Dean & DeLuca based on an Ole Scheeren kitchen design. 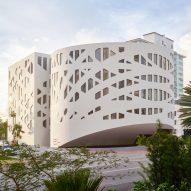