Kamvari Architects has won a contest to design pit stops along the world's longest railway line, by proposing a series of wooden cabins that look like elephants' trunks.

The London-based studio won first prize in the competition calling for customer facilities at points along the Trans-Siberian Railway, a 9,289-kilometre route that connects Moscow with the Russian Far East.

The studio's winning proposal is intended to combine traditional woodworking techniques with a form that mimics the movement of a train.

At one end, each structure is designed to resemble a traditional gabled cabin, while the other end is stretched out and raised up towards the sky. This results is a slender, trunk-like form.

"Our design approach is driven by the pursuit of elegance," explained Kamvari Architects director Omid Kamvari.

"Building on traditional forms, combined with the dynamic nature of the railway, the building form seeks to express the speed of the train versus the stillness of the stations, creating a timeless and calm interior which reflects local traditions and values," he added.

The structures will be slightly raised up to help insulate them from the cold ground, and their unusual forms will allow them to use passive methods of ventilation, heating and cooling.

The projects was initiated by CDS NORD – a project delivery company that works alongside governmental departments – in partnership with competitions organiser Bee Breeders.

Judges praised Kamvari Architects' design as being both sustainable and rooted in the history of the railway.

"The project implemented a traditional construction and form with a strong silhouette and strong geometry, making it a bold and recognisable landmark that wouldn't be out of place along this historic railway route," they said. 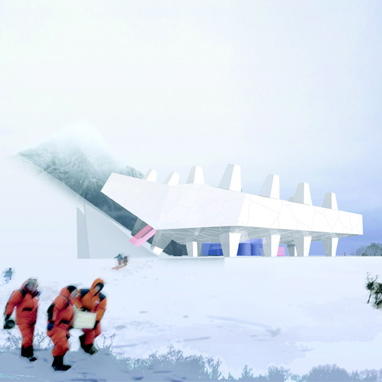 Five of the cabins are scheduled to be built in early 2018, with more to follow, according to Omid Kamvari.

It will be among a minority of architect-designed projects in Siberia, which accounts for 77 per cent of Russia's land area. Other examples include a proposal for a mammoth museum.