New York-born delicatessen chain Dean & DeLuca is moving away from its signature aesthetic to launch a new style of fast-food outlet based around a kitchen design by architect Ole Scheeren.

Titled Stage, the concept imagines the kitchen and servery as a sort of theatre-in-the-round, where cookery is a performance and the staff is the cast.

It is anchored by one central object, Scheeren's rectangular kitchen counter, where food is made and displayed on platforms at varying heights. Customers are meant to circulate around the centrally positioned counter to watch the "spectacle" and order when they desire.

"Stage is a concept to create a singular pristine object that celebrates food," said Scheeren. "I wanted to showcase that really on a stage."

"I wanted to elevate staff to not simply be mechanical makers but in a way actors that perform in a play – and in a way where they then join with their audience or the customer in that spectacle of making, offering and consuming."

Dean & DeLuca and Scheeren unveiled the Stage concept today at Design Miami 2016, where they have installed a prototype of the design.

The deli chain – which began in New York's SoHo and now has outlets across the globe – plans to roll out the concept in a number of new stores from 2017.

Stage sees the deli move away from the highly recognisable delicatessen aesthetic it has developed since opening its first shop in 1977.

Instead of the white subway tiles, grey-veined marble and metal shelving, Scheeren's design is characterised by two horizontal slabs of mirrored stainless steel, one forming a roof and the other the counter.

Between the two, a topography-inspired servery made of layers of white Corian displays food at varying heights.

Instead of imposing a repetitive aesthetic on a series of outlets around the world, Scheeren intends the design to take on a new look at each location.

"The space we find we strip it back to its bare bones and accept it as a found object," he said. "We insert a very precise piece, which is the stage. The interplay between the two will create a very dynamic relationship."

Scheeren – who ranked 68th among architects on Dezeen Hot List – was formerly at architecture firm OMA and left in 2010 to start his own practice, Buro Ole Scheeren.

He has recently finished two major projects: 2015's World Building of the Year The Interlace in Singapore and Thailand's tallest skyscraper, MahaNakhon tower, in Bangkok.

It was the latter project that brought Scheeren into contact with Dean & Deluca – MahaNakhon was constructed by Pace Development, whose CEO, Sorapoj Techakraisri, acquired Dean & Deluca in 2014 and wants to reinvigorate the brand.

Scheeren's Stage prototype is on display at the main exhibition hall at Design Miami, where it is functional and serving food.

The design fair runs from 30 November to 4 December 2016. Scheeren's former colleagues at OMA are unveiling their finished Faena Forum art and performance centre in Miami Beach during the event. 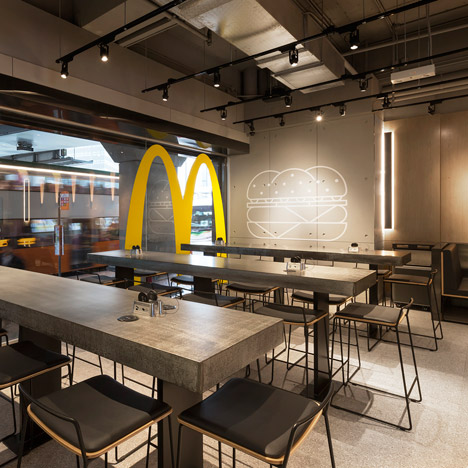