Kicking off our review of 2016, architecture editor Jessica Mairs looks back at 10 skyscrapers that have bent the rules in the past year, ranging from a triangular tower in New York to a Lego-like Singapore tower and the world's second-tallest building.

The pyramidal silhouette of Bjarke Ingel's 142-metre-tall "courtscraper" stands out from the grid of rectilinear towers lining the banks of New York's Hudson River. Apartments are organised around a huge well carved from the block's centre – which has the same proportions as Central Park.

Nicknamed the Jenga Tower after its stacked-box formation, Herzog & de Meuron's 56 Leonard tower tapers towards a cluster of 10 unique penthouses at its peak. The glass cuboids give residents floor-to-ceiling windows facing the New York horizon.

Aerial walkways link the two huge terraced towers that make up Moshe Safdie's Lego-like Sky Habitat in Singapore. Balconies project away from the facades of the blocks, lending them the same pixelated appearance as the architect's Brutalist icon, Habitat 67. Other features include jutting balconies, a sky pool and elevated walkways.

At 425 metres tall, Rafael Viñoly's 432 Park Avenue skyscraper looms head and shoulders above Manhattan's already vertiginous skyline. One of a new breed of super-tall skyscrapers, when the skinny tower completed earlier this year, it was crowned as the tallest residential building in the western hemisphere.

Angled glazing covering the 260-metre-tall facades of SOM's Beijing Greenland Centre refracts daylight to cast a pattern of shade across the skyscraper. The tessellating glass modules are made from two types of trapezoid – one that tapes upwards and one that tapers downwards.

Mexico's tallest building is sheathed in concrete on two of its three sides, which feature just a smattering of windows. But the third facade is covered solely in gridded glazing. The tower's 246-metre stature is a sharp contrast to the petite 1920s building incorporated into its base as a lobby.

The first tower to complete at New York's Hudson Yards development, this chamfered glass block by Kohn Pederson Fox is the global headquarters for the fashion brand Coach. The glass-covered block stands at one end of the High Line, giving workers within vistas along the green corridor that runs along an abandoned railway track.

Pleats of aluminium shroud the facade of the Shanghai skyscraper Kengo Kuma created for the property developer Soho China. The slender strips of perforated metal angle to fit the form of the building, creating a rippling texture that disguises the typical horizontal pattern created by floor plates.

The world's second tallest skyscraper – 632 metres tall with 121 storeys – actually completed at the very end of 2015, but opened officially this year. Its distinctive twisting form is the result of rigorous wind-tunnel tests that aim to offset the impact of Shanghai's typhoons. When it completed, the Council on Tall Buildings and Urban Habitat declared it a new "prototype for tall buildings". It recently won the inaugural American Architecture prize. 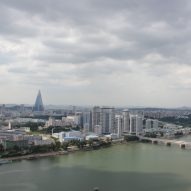