Craft, technology and "evolving notions of copying" are among the themes explored by one of the broadest collections of Asia-centric design, which has just gone on display in Hong Kong's new West Kowloon Cultural District.

The Shifting Objectives exhibition provides a preview of the design objects held by the M+ museum of visual culture, due to open in 2019 in a Herzog and de Meuron-designed building.

In the interim, the site's first permanent venue, the mirror-clad M+ Pavilion, is already hosting exhibitions.

The M+ museum takes a broad approach to collecting but focuses on 20th- and 21st-century design "as seen from the museum's vantage point in Asia".

"We have no set criteria except that whatever we collect should achieve what it's supposed to achieve, and it should do so well," M+ lead curator of design and architecture Aric Chen told Dezeen. "We take a pluralistic approach that aims to reflect the richness of design."

"That being said, there are certain narratives and themes that we've targeted to begin with, and so we start with works that help illustrate those stories."

While Histories is quite straightforward, Constellations takes a more experimental approach, exploring various themes affecting the design industry today through the juxtaposition of 40 objects.

Some of the themes explored in this section include the reinvention of craft, the effect of digitally enabled design and fabrication, and what M+ describes as "evolving notions of copying".

"I think, given where we are, copying is not just an especially resonant issue but also one in which we can perhaps offer a different take that's perhaps more nuanced, and not so black-and-white," said Chen.

This section of the exhibition includes examples of products made in Shenzhen and the surrounding manufacturing hubs of China, known for their designer reproductions. Chen has tried to show how, from that genesis, the manufacturing economy has moved towards innovation.

Other works in this section include the Imitation Imitation vase by Chinese designer Hao Zhenhan, who works with craftsmen in the antique reproduction industry, and the Copy-tiam Chair by Hans Tan, an open-sourced copy of a copy of the Thonet chair No.14.

All in all, the exhibition features just over 120 works from the museum's collection of 2,500 design objects.

Shifting Objectives: Design from the M+ Collection opened at M+ Pavilion on 30 November 2016 and continues until 5 February 2017. 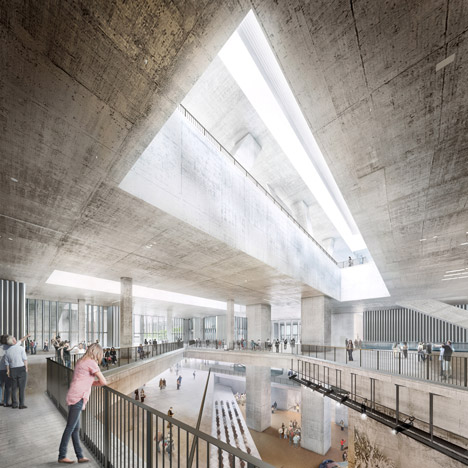