Cedar boards and slate blocks clad the geometric blocks that make up this house in rural Quebec, designed by Canadian studio Simard Architecture to sit over the remnants of an old farmhouse.

The residence, located in the village of Hemmingford in southern Quebec, was designed for a couple swapping their home in the city for a life in the countryside.

Called Hemmingford House, the property takes its cues from the surrounding landscape, characterised by fields and orchards, weathered fences and wooden barns. The path of the sun also influenced the design.

"The sun's course throughout the changing seasons, as well as precise views over the fields, guided the home's orientation and site location," said Simard Architecture, a studio based in Montreal.

The 3,500-square-foot home (325 square metres) was built over the foundations of the old farmhouse. The original fieldstone walls were preserved, serving as artefacts that lead visitors to the main entrance "while bearing witness to the memory of place".

Windows of varying sizes puncture the cedar and slate walls of the two-storey home.

The untreated cedar boards, which draw reference to the area's wooden barns, are intended to develop a patina. "With the passing of time, the house will become increasingly fused with its surroundings," the firm said.

The grey slate was sourced from a nearby quarry and was cut into blocks rather than the typical thin slabs. The firm extended the slate to the ground level in order to conceal the concrete foundation.

"Like a stone heaved from the frozen earth, the house rises from the field," the studio said.

The slate also was used for the flooring for walkways and terraces.

Visitors enter into a glazed, double-height entrance hall at the centre of the home. "With floor-to-ceiling windows at both extremities, this space offers expansive views over the entire property," the firm said.

An open staircase leads to a glass-floored bridge on the upper level, which connects the master bedroom to a library and guest suite.

On the ground level, the eastern portion of the house contains an open-plan living and dining area.

The other side encompasses a kitchen, a game room and a casual living room envisioned as an enclosed veranda. To lend a sense of openness to the space, the team installed sliding glass windows between the kitchen and veranda.

Other recently completed homes in Quebec include a compact, white cabin by Pierre Thibault and a woodland cottage by Cargo Architecture with a swing seat and wood store built into its facade. 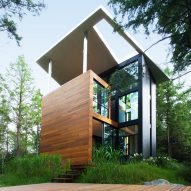