Seattle-based MW Works has overhauled an early-20th-century barn to create a family holiday home that celebrates rustic materials and fittings.

MW Works was tasked with completely modernising the old working barn, which is located in Washington state, and transforming it into a three-bedroom residence that it calls Canyon Barn.

The architects sought to retain as much of the original structure as possible, and to reuse any materials or fixtures they could.

"A blend of preservation and intervention, this project updates an ageing barn without losing the memory of its history," explained the team.

"The building was restored with the intention of creating a comfortable home while retaining its original form, character and history."

The framework of the 3,875-square-foot (360 square metres) building was mostly preserved. When original elements could not be salvaged, they were dismantled and reused elsewhere.

For example, the house needed to be entirely insulated, and the exterior siding could no longer be used. Instead of discarding these wooden planks, the architects carefully removed them and reapplied them across the interior walls.

Since the building envelope needed to be entirely reworked, the architects could create generous new window and door openings, bringing plenty of natural light inside. One of these new openings extends all the way up to the roof.

The ground floor includes a storage area, utilities spaces and two small bedrooms. The rest of the space is used as a living room, with double-height ceilings that reveal the wooden roof structure above. 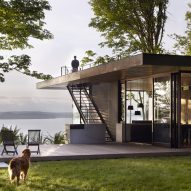 An open central staircase leads to a generous dining room and kitchen on the first floor. These sit alongside a secondary living area, which is open to the one below.

The master bedroom is located to one side of this opening, while the opposite side accommodates a play space for the clients' children.

Light-hued wooden panels cover many of the new partition walls, offering a contrast with the dark-toned old structure.

"New interventions were carefully considered to have a modern aesthetic while at the same time working within this raw palette," added the architects.

MW Works is led by architects Steve Mongillo and Eric Walter. Other recent projects by the firm include a renovated mid-century modern home in Seattle and a waterside Washington retreat.