Forests are set to benefit from internet-of-things technology with the release of a wireless alarm system that can predict the path of a growing fire.

Spanish practice Eli-Gutierrez Studio developed the tree-mounted Senticnel sensors to identify the location of a forest fire and alert emergency services shortly after it breaks out.

Combining the sensors' real-time data with fire-growth simulation software, the system also models the path a fire is likely to take, enabling firefighters to reach it faster and address it more effectively.

"Rapid detection and a localised focus are an aspect critical to addressing the fire in the first minutes and preventing progress," the studio told Dezeen.

"In this case, the system also includes protocol notices – email, SMS and phone calls – that are activated when a fire is detected to immediately notify the alert status to the competent authorities."

Designed for the Spanish company Ntforest, the Senticnel system is made up of sensors enclosed in palm-sized, olive-green "pods".

Mounted high up on tree trunks within approximately five kilometres of each other, the pods communicate data wirelessly back to a base hub, which sends relevant notifications to any designated device.

Among other factors, they monitor temperature, humidity, radiation and wind speed and direction.

Senticnel's associated software combines this data with spatial information from the open-source fire growth simulator Farsite to predict the path the fire will take and provide a real-time risk assessment.

A system including 20 sensors has already been installed in the forest of La Vallesa, an area in the Paterna municipality of Valencia that is susceptible to forest fires.

The pods are designed to withstand extreme heat and encourage rain to run off.

The internet of things is often spoken about in terms of its impact on the home — with the arrival of smart cribs and smart radiator valves, among other things — but such connected objects are having an impact in a number of environments.

As well as the use of Senticnel in Spain, sensors in the city environment of Chicago are acting like a "fitness tracker for the city", with data being used to improve infrastructure and residents' health.

Meanwhile, MIT researchers are planning for the "death of the traffic light" with smart intersections based on sensors. 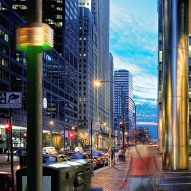