A cast concrete bathtub, a walnut-lined office and translucent walls that move at the touch of a button all feature inside this renovated London apartment by The Klassnik Corporation.

The London-based architecture studio was asked to create the loft-like home on the sixth floor of a former printing works in Clerkenwell, known as the Ziggurat Building.

The team used an assortment of architectural features to add personality into the home.

This move is echoed by the choice of furnishings and embellishments, which include a taxidermied capercaillie – a type of woodland grouse – and red, flower-shaped taps.

"Surfaces, transparency, varied opacities, reflection, liquids and motion combine in the fluid arrangement of domestic spaces within the apartment, surrounded by vistas of the city," explained studio founder Tomas Klassnik.

"This quality of visual openness informed the arrangement of spaces within."

The entrance leads directly through to the open-plan living space – a room that accounts for more than half of the flat's area. This curved room is framed by concrete columns with tapered tops.

Off to one side of this space and raised up on a pedestal is the concrete bath tub. This can be revealed or hidden – depending on the occasion and the level of privacy required – thanks to sliding mechanisms and smart glass that changes transparency.

"Sliding glass walls can transform to reveal or conceal this conventionally most private of spaces at the click of a button," explained Klassnik.

The red flower-shaped taps add a dash of colour to this otherwise minimal room. There is also a large spout that adds some ceremony to filling up the tub with water.

The master bedroom is directly connected to the bathroom, and features a wardrobe with rose-gold hue stainless-steel doors.

By contrast, the storage closets in the entrance hall are fronted by American walnut, forming a series of piers intended to simulate "the effect of an architectural enfilade".

"The fins recede progressively to create an exaggerated perspectival threshold between the main living area and the access core," added Klassnik.

More walnut features in the home office – a space envisioned as a "snug pocket of static timber texture and warmth".

Instead of standard rectangular entrance, the doorway include a semi-circular cutaway the echoes the form of the columns of in the living space.

The other rooms in the home are a guest bedroom and a toilet separate from the main bathroom.

Klassnik founded his eponymous studio in 2005. Past projects include a London office for creative agency YCN.

This is the third project the architect has completed in the Ziggurat Building – one of numerous former factories undergoing renovation in Clerkenwell.

Other new homes created in these buildings include a flat with concrete beams criss-crossing over the ceiling and an apartment for two theatre and film directors. 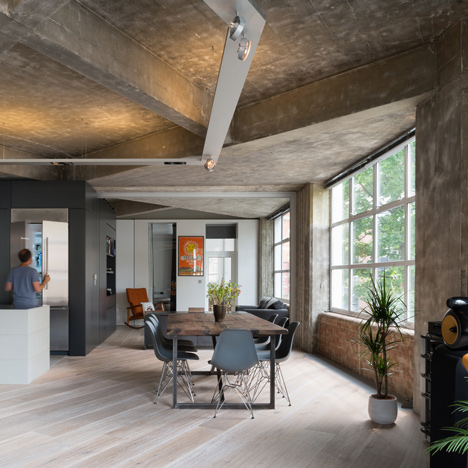 Photography and movie are by Jim Stephenson.