A charity that invites high-profile figures to speak in schools around the UK has called for more leading architects and designers to participate.

Speakers for Schools has around 1,100 leaders from business, industry and the arts among its volunteers.

However a list of speakers from the creative sector contains just one industrial designer, one fashion designer and no architects.

"We don't have enough people from the creative industries," Ashley Hodges, executive director at Speakers for Schools, told Dezeen.

"Some sectors have been much quicker to spot us but we've not had great success with architects and designers," she said. "We definitely need more people from the sector."

The charity, which was set up by political journalist Robert Peston in 2011, provides free speakers to secondary schools around the country.

Peston established the programme after realising that state-school pupils were often unaware of the career choices available to them.

"People like Robert were invited into private schools but not state schools," Hodges said. "How do you get the top people who are leading and shaping their industries to talk to pupils in state schools? These are people they would never meet in their communities." 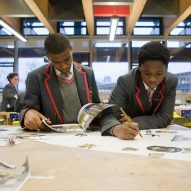 Hearing high-achieving individuals speak "has a very powerful effect on a teenager who's sitting there not really knowing what they want to do," she added. "Young people don't realise the broad range of careers on offer."

Getting speakers into schools outside London and the south-east is a particular priority for the charity, Hodges said, adding that a sister organisation, Inspiring the Future, was also keen to hear from architects and designers  at all levels willing to give up time to speak in schools to give careers talks locally.

The call comes amid rising concern over the decline in the number of young people studying design at UK schools. The number of students taking design and technology courses fell 10 percent this year, and there are fears numbers could drop still further with the introduction of the new Ebacc curriculum.

The National Society for Education in Art and Design (NSEAD) warned in October that provision for art and design is being "significantly eroded" in schools. "Higher ability children and young people are being actively discouraged from taking art and design at GCSE," said NSEAD general secretary Lesley Butterworth.

On top of this are fears that Brexit will lead to a decline in overseas students coming to the UK to study design, leading to a skills crisis in the sector. The Council for Higher Education in Art & Design (CHEAD) last week warned of a "brain drain" as overseas students and teachers desert UK higher education.

For more information on their sister charity please visit www.InspiringtheFuture.org. 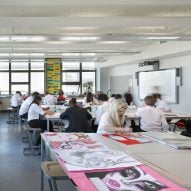