Called Hyytinen, the cabin is located in northern Minnesota, on a gently wooded site that slopes down towards Lake Vermilion. The scenic area is a popular fishing destination and draws tourists from across the region.

L-shaped in plan, the structure comprises two rectilinear volumes that are stacked perpendicular to each other. The lower box extends over a small patio, while the upper volume cantilevers over a wooden deck.

The building replaces an older, non-insulated cottage that was oriented toward the east and sat parallel to the lake. The new structure faces south and looks towards a restored sauna built from cinder block.

"This shift allowed the east end to be fully glazed, without visual obstruction," said Salmela Architect, a Minnesota-based studio led by architect David Salmela. The new orientation also enabled the creation of the south-facing deck, which is ringed with wooden battens.

The dwelling is clad in wooden boards that were coated with a material similar to pine tar, a natural preservative that has long been used in Scandinavia. Underneath the siding is a "splash base" to further prevent deterioration. 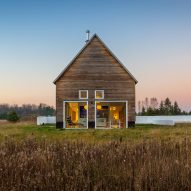 Inside, the architect sheathed walls and ceilings in locally sourced, light-coloured wood, which contrasts with dark-grey floor tiles. Expansive glazing offers sweeping views of the landscape.

Outside, a series of steps connects the cabin to a new boathouse and the shoreline. "The dry-laid stone walls, steps and pathways provide a wonderful warmth and contextual appropriateness to the rugged northern Minnesota setting," the studio said.

Other projects by Salmela Architect include a rural Wisconsin home with a steep roof, square windows and cedar cladding, and a Minneapolis office building with a black-and-white, chequerboard facade.

Photography is by Paul Crosby