A massive skylight illuminates the newly revitalised trading floor for the National Bank of Canada, which was formerly a "dark and uncomfortable" space.

Overhauled by Canadian studio Architecture49, the trading floor – the largest in Quebec – is located in Sun Life Building, a historic, 24-storey tower in central Montreal.

The heritage space, which dates to 1917, consists of an open hall ringed by a mezzanine. Two rows of black and gold Corinthian columns are situated in the centre of the space.

The room features marble cladding, a giant skylight, and a ceiling decorated with gold leaf.

"Despite these rich details, the trading floor was dark and uncomfortable," said Architecture49, a national firm established in 2014 through the union of six architecture studios – Arcop, AE Consultants, North 46, PBK, Smith Carter and WHW Architects.

The firm's Montreal office was tapped to revitalise the trading floor. "It had been 20 years since the space was last renovated, and it needed to be modernised," the team said.

The architects were charged with creating a bright, comfortable and technologically sophisticated workspace for 256 traders and managers. The room totals 30,735 square feet (2,855 square metres). 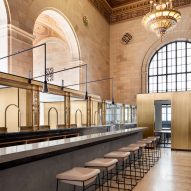 "The trading floor is the financial institution's nerve centre, where traders complete transactions for the bank and its clients," the team said. "The integrity of the unique space had to be safeguarded at every stage, from design to construction."

The large glass skylight was cleaned and fitted with new and efficient lighting fixtures, enabling light to flood the space below.

Original columns, bronze railings and ceiling details were all restored and enhanced, returning the space to "its rightful glory".

The team added contemporary elements, such as glass partitions around private offices on the perimeter.

The trading floor is largely dominated by long rows of open work stations. "Special attention was paid to the room's acoustics, which were tailored to allow traders to share the bustling open-concept space peacefully," the team said.

Other recent renovations projects in Montreal include the conversion of an old bank in the city centre into a cafe and tech start-up office – a project by local architect Henri Cleinge.

Photography is by Stéphane Brügger