Geometric alcoves, rope partitions and a dramatic arched ceiling make up the design of this new restaurant by California studio Archisects.

Called Madison, the contemporary restaurant is located in the University Heights district in San Diego, a coastal city in Southern California. The 3,000-square-foot (279-square-metre) space formerly housed a nightclub.

The restaurant offers an eclectic menu and artisanal cocktails. Archisects, a local studio, was focused on two primary goals for the venue – providing "longevity and warmth" through the use of wood and geometric shapes.

Influenced by Japanese modernism and Norwegian design traditions, the firm also aimed to create a distinctive space that stands out in city, which is known for its beaches and warm climate.

"With the Madison design, Archisects sought to make a timeless, inviting space while expanding the design palate of the San Diego area," the firm said.

Painted light blue and illuminated by nautical-style light fixtures, the street facade is meant to reference Victorian-era storefronts seen throughout the neighbourhood.

Patrons enter into a casual lounge with walls and ceilings sheathed in cedar planks.

Flanking one end of the room is a bar lined in white tiles. On the opposite side are cosy booths separated by angled strands of rope.

A tilt-up door leads to the dining area, which can also be accessed via a wood-lined tunnel on the side of the building.

The dining zone is defined by a 20-foot-high (six-metre) vaulted ceiling with tongue-and-groove cedar cladding. The room is fitted with wooden chairs and tables and caramel-hued banquettes.

To break up the length of the room, the designers placed multicoloured, triangular panels along one wall, and alcoves with blue, geometric bas-reliefs along the other.

"The cavernous space is made more intimate with the subtle inward tilt of the walls, along with the addition of a site-specific rope installation and Jonathan Adler chandeliers," the firm said.

The team sought to use a similar design vocabulary in both the lounge and dining areas. "Continuity is important in maintaining the calm and comforting feeling of Madison," the studio said. 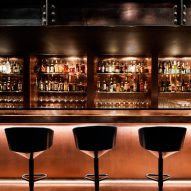 Other new restaurants and bars in the US include a TGI Fridays in Texas that features a Scandinavian-style aesthetic and a "darkly theatrical" cocktail lounge in Atlanta by Tom Dixon.

Photography is by Andy McRory.