Powerhouse Company has revealed its plans to convert a brutalist bunker in Eindhoven into high-rise housing.

The Bunker, originally constructed in the late 1960s to designs by Dutch architect Hugh Maaskant, was formerly used as a student centre by Eindhoven University of Technology.

The low-lying concrete structure is located to the north side of the city's Central Station.

Rotterdam-based Powerhouse Company plans to renovate the existing structure and extrapolate it into a high-rise housing tower. The tower will also include offices, a cafe and underground parking, with the possibility of adding a hotel.

"The architecture of the Bunker marks a very important period in the history of post-war architecture," said Nanne de Ru of Powerhouse Company.

"Instead of the standard design solutions for monuments to either place the new development within a remote distance, or to leave it as 'fremdkorper' contrast, we designed the new tower on The Bunker as a continuation of the design language of Maaskant," he added.

Powerhouse Company aims to retain elements of the existing building and reference them in the tower. Its vision is for an "inseparable whole" in which the old and new structures merge.

Renderings show the a stepped formation at the junction of the bunker and tower, graduating the transition from the low horizontal base to a more slender structure above.

The architects are working on the project with a team that includes developers RED Company and Being Development. It is expected to complete in 2019. 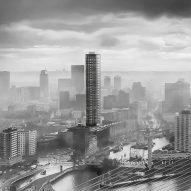 Powerhouse Company is one of a number of innovative firms based in Rotterdam – now a global hub for innovative architecture.

The studio also recently unveiled plans to build Europe's skinniest residential skyscraper in the city, while past projects include a student centre with a curving oak interior for Erasmus University in Rotterdam and a cluster of gabled cabins used as a summer retreat in northern Denmark.