This holiday home by Japanese studios Taku Sakaushi Architects and OFDA has a tapered form that broadens towards a garden, but narrows where it meets a road, creating a secluded getaway in Karuizawa.

The site is hemmed on its northern edge by a street and by neighbouring properties on its other sides, so Taku Sakaushi and OFDA tried to create a design that ensures the house is not overlooked.

The architects came up with a form that restricts views of the road through a narrow recessed porch and instead focuses on the garden to the rear through a long wall of glazing.

The house is named Karuizawa Tunnel after the corridor that channels through the distinctive angular form, linking the urban entrance with the more natural setting to the rear.

"An important request from the client was to keep the surrounding buildings out of sight from his home as much as possible," said Taku Sakaushi.

"After examinations of numerous alternative designs, the finished building has a megaphone shape, with its opening facing toward the south."

"One of the reasons to have chosen this shape has a lot to do with the consideration to the view from the home," he continued.

"From the beginning, I wanted to investigate a tunnel-like shape with an entrance to the north and the opening to the south."

Rooms are set on either side of this central corridor – a kitchen, dining room and bathroom to one side, and a bedroom, tatami-floored Japanese rooms and a lounge to the other.

The whole structure is topped by a pyramidal roof, with its apex above the the broadest area of the corridor, which lies towards the garden. Here there is a wooden terrace that faces into a grove of mature trees.

The underside of the roof is covered in light-coloured wood and the walls painted white to contribute to the brightness created by abundance garden-facing glazing. The neutral tones of the interior finishes are echoed in muted textiles and furniture.

"In the process of developing ideas about architecture as frame, I was influenced by sculptures, paintings, and novels in which I sensed similar motifs," said Taku.

"In this project I was thinking about creating a big frame ‒ in this case, a tunnel-like structure ‒ that goes from an entrance on the north side with a big roof, to the opening in the south facing greenery," he added. 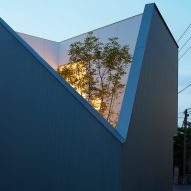 Finnis Architects employed a similar concept when designing a home for a winery in Australia, placing broad terraces overlooking the vineyards but enclosing the entrance in dark corrugated metal and wood.