Two prototype models of a gaming laptop with three screens have been stolen from the CES tech show in Las Vegas.

The Project Valerie concept device features three 4K screens that fold out for use. It is billed as the first portable laptop of its kind in the world.

The founder of the Californian tech company, Min-Liang Tan, posted the news on his Facebook page that the laptops had gone missing from its booth at the Consumer Electronics Show (CES) on Sunday.

He said the company was taking the incident "very seriously", and suggested that the theft may have been an act of "industrial espionage".

He also stated that Razer would offer a $25,000 reward for "original information leading to the identification, arrest and conviction of a criminal suspect".

"We have filed the necessary reports and are currently working with the show management as well as law enforcement to address this issue," he said.

"We treat theft/larceny, and if relevant to this case, industrial espionage, very seriously – it is cheating, and cheating doesn't sit well with us."

A spokesperson for the Consumer Technology Association – which runs CES – confirmed the theft to the BBC, adding that security of exhibitors at the fair was their "highest priority".

"We express our regrets," she said. "The security of our exhibitors, attendees and their products and materials are our highest priority.

"We use a wide variety of security measures at our show to combat theft. For example, we delay labour coming on the show floor until an hour after the show closes so that exhibitors have a chance to secure product before dismantling their booths."

Tan founded Razer in 2005. Since then, the brand has gained a cult following among the gaming community, and has won the "Best of CES" award consecutively for seven years. 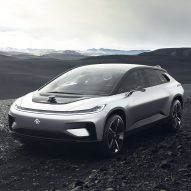 CES took place in Las Vegas from 5 to 8 January. Other projects on show ranged from a ride-sharing concept car with an "emotion engine", to a wireless breast pump that allows women to express milk on the go.