This long-drop composting toilet by Invisible Studio provides facilities for the practice's self-built woodland workshop, and was built using offcuts from that project.

Invisible Studio founder Piers Taylor recruited a team of unskilled volunteers and friends to build the toilet from materials scavenged from the surrounding woodland. This meant the toilet could be delivered for free.

The stilted structure is set over a steep slope near the studio building. It has a dark exterior composed of fibre-cement tiles and a door made from vibrant red polycarbonate sheeting.

The structure is made from recycled materials as well as unseasoned timber grown collected from the site around the research facility, which is located in the English countryside near Bath.

Some materials were salvaged from skips, donated by neighbours or left over from the design of the adjacent workshop – which was built from recycled materials with the help of friends, neighbours and colleagues.

A timber jetty leads out to the tiny two-square-metre toilet, which has an irregularly pitched roof that overhangs the door. The chipboard panels forming it are left exposed inside and used to suspend a single lantern.

Instructions for correct usage are scrawled onto a blackboard on the wall behind the toilet seat.

Waste material is filtered in a soakaway on the slope below, and collected for later use as fertiliser.

Invisible Studio applied the same recycling concept to create a pair of woodland maintenance buildings at the National Arboretum in Gloucestershire, England. The gabled blocks were made using only trees felled in the routine maintenance of the estate, which hosts a collection of 15,000 trees originating from China, North America, Japan, Chile, and Britain. 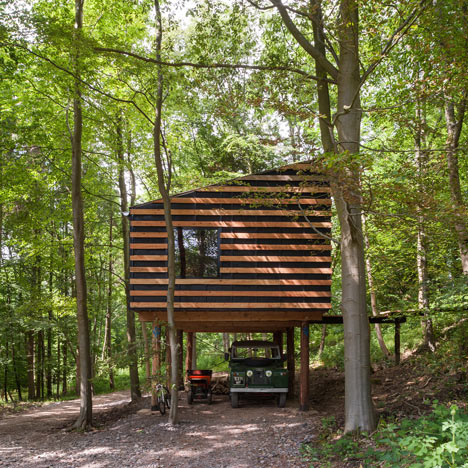