British designer Tom Dixon has taken the trend for design-led accessories to the next level – by launching a range of products that even includes washing-up liquid.

Dixon's design brand aimed to "explore the bathroom and the kitchen sink" with its latest offerings, which will be unveiled at the Maison&Objet trade fair in Paris later this month.

The most unusual addition to the designer's already-vast collection is the washing-up liquid, although the new range also includes hand washes and balms, lighting and bathroom storage containers.

According to Dixon, the move was prompted by the number of hotel projects his studio is working on.

"We have been working on a multitude of hotel bathrooms, spas, apartments and restaurants, and this revealed a new found passion for bathrooms and kitchens," explained the designer.

"After working on some of the harder, tougher components of lighting and storage, it all felt a bit incomplete without looking at the softer elements... so it seemed only natural to start thinking of the lotions and potions of this most cleansing of spaces."

London includes a hand wash, a hand balm and washing-up liquid. According to Tom Dixon, the liquid soap contains black clay and charcoal, making it black in colour, while the hand balm includes rosehip oil, carrot oil and honey.

Royalty and Orientalist only include hand washes and balms.

The first brings together lemon, earl grey tea and cedar wood to "capture the smell of tea time with scones and strawberry jam". The second combines violet leaves, rose, cinnamon and musk to create a "floral fragrance reminiscent of an Indian wedding".

The bathroom accessories are described by the brand as "a construction set for your bathroom shelf". These stackable elements come in white marble, blue glass and copper-plated stainless steel, and can be combined in different ways.

Dixon was one of the first designers to understand the value of offering accessories, as well as more expensive furniture. The move reflects techniques used in the fashion industry, where major brands have long offered accessory lines as an entry point to their collections.

In 2015, Dixon told Dezeen: "I don't think we ever were intending to be just a furniture and lighting brand. We like to attack the whole interior."

The designer ranked 39th in the inaugural Dezeen Hot List, a countdown of the most newsworthy players in the design industry.

Dixon's latest collection will be on show at the Maison&Objet trade fair from 20 to 24 January. The event's designer of the year will be Pierre Charpin, who will also be showcasing his work, in a self-designed hub. 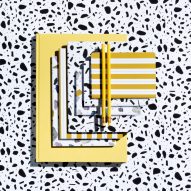