Dezeen promotion: [email protected] has unveiled its programme for this year's London event, which features a talk on floating architecture with Gensler, Carl Turner Architects and Studio Octopi.

Dezeen is media partners for the two-day trade [email protected] trade fair, which is aimed at architects, designers and specifiers. It will return to Olympia National Hall in London on 25 and 26 January 2017.

This year focusing on the theme of water, the talks programme includes a discussion on amphibious city design led by Chris Romer-Lee of Studio Octopi, Carl Turner of Carl Turner Architects and Ian Mulcahey of Gensler.

The programme also includes a discussion on waterway development with Alex Ely of Mae Architects, and one titled A Bridge Too Far? that will explore the challenges and opportunities in bridge construction.

The Design Driven by Natural Forces talk, led by RIBAJ executive editor Eleanor Young, will discuss projects shaped by the natural world with some of the UK's leading architects and designers. 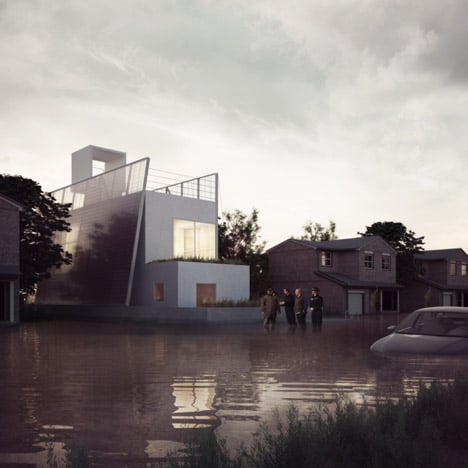 A jury has selected 100 European suppliers to exhibit a wide range of products during the event, including surface and lighting solutions, as well as interior and exterior fixtures and fittings.

Metal panels, street lighting and furniture by BPlan will be on show, and Knauf AMF will exhibit its new Heradesign wall absorbers.

Finnish brand Aurubis will launch its pre-weathered and pre-patinated copper, as well as copper alloys, for roof and facade cladding. OLEDs by Blackbody and flooring by Tarkett will also be on display.

An exhibition by Pavillon de l'Arsenal titled Matière Grise urges the construction trade to use more and fewer raw materials. It will bring together 75 projects, 14 essays and 13 interviews to show the potential of recovery and reuse.

[email protected] has also commissioned design and architectural journalist Giovanna Dunmall to conduct the Innovative Interviews series with eight architects, developers and engineers, asking them who they would most like to sit next to at dinner.

There will also be a pop-up book shop by the Royal Institute for British Architects that will give visitors an opportunity to purchase magazines and books based on the show's theme.

[email protected] takes place at London's Olympia National venue in Kensington from 25 to 26 January 2017 from 1 to 8pm.

Attendance is free to the trade, when registering using code 1470.

Read on for the full programme of events:

Rivers have shaped our towns and cities, and the points at which we choose to cross them are of fundamental importance, both for transport and the built environment that springs up around these urban nodes. Bridges therefore play a vital role in the function of daily life but they are also feats of engineering and objects of beauty. What happens when the bridge becomes the focus of attention, rather than its landing points or the gap it spans? We are drawn to beautiful bridges and the UK has a long history with their design. In this talk we will explore the challenges in creating bridges in difficult places and the ways in which the bridges themselves can become spaces to enjoy and interact with.

Water, air, sunlight and the movements of the earth are just some of the multiple factors that affect our buildings and urban environments. All design is affected by the elements in some way but some practitioners choose to respond more closely than others. Eleanor Young, executive editor RIBAJ, will discuss projects that have been shaped by the natural world with some of the UK's leading architects and designers. They will explore the ways in which landscape, materials and design combine to form spaces for humans to reconsider their role in the nature.

Roger Madelin is known as the man behind some of the most successful developments in the UK, not least the complete transformation at King's Cross into one of London's most important city quarters. He has now been appointed by British Land to oversee the development of their Canada Water site, which also includes Surrey Quays Shopping Centre and Harmsworth Quays, the former Daily Mail General Trust printing works. The combined sites have a huge potential for development, including new offices, shops, homes, schools, leisure activities and community spaces. He will talk to Peter Murray of New London Architecture about past projects and his vision for the future development of the capital.

The UK is undergoing rapid changes as cities develop on limited land and climate change brings unpredictable weather patterns and flooding. Where will we live, work and play in the future and what role does water play? In this panel discussion we will debate new ideas for the future of design on or along rivers, lakes and canals. From floating leisure centres to houses created to react to rising tides, our panel of experts will explain how they have been driven to create architectural and technical responses to the very substance that has helped us build our cities and conquer the land.

Alex Ely, Mae Architects
Peter Chowns, Canal and River Trust
Steve Webb, Webb Yates
UK canals and rivers were once the beating heart of transport and infrastructure for the entire country. Goods and people were carried the length and breadth of the land but roads and the railway eventually made this network redundant. These waterways are now having a resurgence as people have a strong desire to live and work along or even on the river. As their popularity rises, our canals and rivers are becoming the focus of debate and a hotbed of development. Phineas Harper, deputy director of the Architecture Foundation and canal boat resident, speaks to architects, developers and engineers about the future prospects for UK waterways and how we can ensure we are making the most of a complex environment.

In recent years, King's Cross has become a byword for successful development in London. Led by Argent, it has proved beyond a doubt that high-quality buildings, a long-term approach to infrastructure and an intelligent approach to phasing can create a destination that becomes a focus for public life, and that uses its green spaces, water frontages and the blue infrastructure itself to maximum effect. In this talk they will explain the success at King's Cross, as well as their upcoming plans to transform Tottenham Hale.