A scooter that doubles as a trolley bag, an intuitive robot companion and a garden room dedicated to conversation are among the six projects commissioned by London's Design Museum to tackle the challenges of ageing populations.

The average age that people live to has been rapidly increasing for decades, resulting in much larger communities of older people in countries all around the world.

With this in mind, the Design Museum asked designers including Yves Béhar, PriestmanGoode and Konstantin Grcic to consider the problems facing older generations and develop possible solutions to them.

All six projects are on show as part of New Old, an exhibition that opens to the public this weekend, curated by Royal College of Art professor Jeremy Myerson.

It marks 30 years since the Boilerhouse Project – the forerunner to the Design Museum – hosted a show called New Design for Old, which covered the same topic, curated by designer and philanthropist Helen Hamlyn.

According to the Design Museum, the issue is even more pressing now. This is particularly the case in the UK, where the average age went up from 33.9 to 40 between 1974 and 2014, but is also identified as a major issue in the USA, Japan, Norway and more.

"Life expectancy has increased almost everywhere, and for almost every social and ethnic group. This is both a triumph for society, and a fundamental challenge to the way that cultures organise themselves," said museum director Deyan Sudjic.

New Old opens to the public tomorrow at the Design Museum's new home and runs until 19 February 2017.

Here's a look at all six new projects on show:

It is designed to make it easier to get up, sit down or stand for long periods of time.

Intended to tackle stigma and stereotypes against ageing, this installation creates a garden room setting where members of the public can engage in conversation with an older person.

The custom-built table features a surface made from giant sheets of paper, where participants can write down their questions.

This "emotionally intelligent robotic companion" is intended to help older people easily connect with technology, allowing them to stay social and continue learning in later life.

The product's form is designed to appear less complex – and therefore intimidating  –  to older people. Its features include a tool that sets goals, a connection to social media and video chat, links to audio and video libraries, and a built-in care system.

Find out more about ElliQ ›

Scooter for Life by PriestmanGoode

This scooter with a trolley-like storage compartment was designed to make it easier for people with limited mobility to get around.

Based on the micro scooter popular with children and young people, the product not only offers support, but also encourages older people to stay physically active for longer.

Find out more about Scooter for Life ›

Head in the Sky by Konstantin Grcic

This zinc galvanised-mesh structure offers a secluded outdoor space for working and thinking, particularly for those who do not want to retreat into their own private domain.

The ramped access is intended to symbolise a departure from age stereotypes, while the lack of roof is designed to "give thoughts free rein".

This branding design is intended to promote the benefits of ageing, in order to reduce stigma.

With the use of decorative graphics, an older product is transformed into a desirable object. 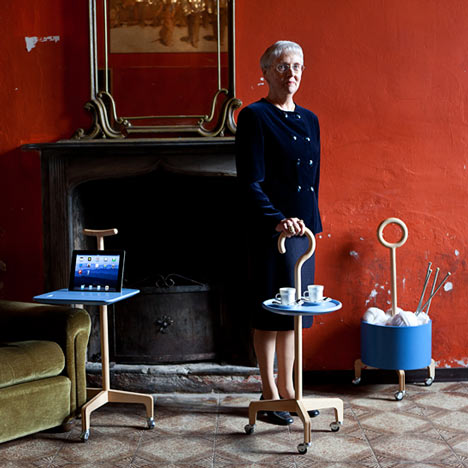 No Country For Old Men by Lanzavecchia + Wai