A beta version of a virtual-reality programme that gives designers the option to draw and manipulate 3D objects has launched.

The Gravity Sketch software, which was first unveiled last year, allows designers to draw, edit and manipulate forms in three dimensions as opposed to on a screen.

Since the product was announced, it has been tested among 50 artists and designers that use virtual reality (VR) in their work.

Having fixed the majority of bugs and glitches, the company has finally put the application live on the Steam Early Access website for beta testing – trialling in the final stages of development – from the general public.

"Unlike other artistic VR creation tools, Gravity Sketch is focused on workflow for creative professionals and bases the creation of geometry in non-destructive solid modelling," said co-founder Oluwaseyi Sosanya.

"Designers, architects and engineers can create quick 3D mock-ups of ideas and seamlessly bring them to more complex CAD software."

By launching the beta version of the software on the Steam website, the company is encouraging the public to provide feedback so that they can gain a better understanding of how people will use the tool.

"We are a small team with big ambitions," they said.

"We have developed a ton of great features ready for everyone to use and enjoy, but we have a big vision for where we want to take things in 2017 and are sharing the software in its current state in order to gain a deeper perspective on the various types of users and their needs."

Gravity Sketch VR works through HTC Vive or Oculus virtual reality tools. Users start with a blank space, and customise it to build an environment of their own.

Within the environment, they can create any kind of design at any scale. Models can also be shrunk down and altered with a simple gesture.

Gravity Sketch was developed by Royal College of Art graduates Guillaume Couche, Daniela Paredes Fuentes, Pierre Paslier and Oluwaseyi Sosanya, with the aim of making it easier to create 3D models for printing.

The team created the transparent Gravity tablet device during their studies, which paired with a stylus for creating 3D drawings in mid-air.

In 2014, they predicted that designers would soon be able to walk through 3D models of their designs and edit them on the go.

Now these predictions appear to be coming true. Last year, Google launched the Tilt Brush app for virtual reality sketching, allowing designers to walk through their sketches in 3D as they draw them.

Last year, visualisation artist Olivier Demangel of IVR Nation said that VR would become "more powerful than cocaine" and predicted that the technology would allow architects to "change the world around you like a God". 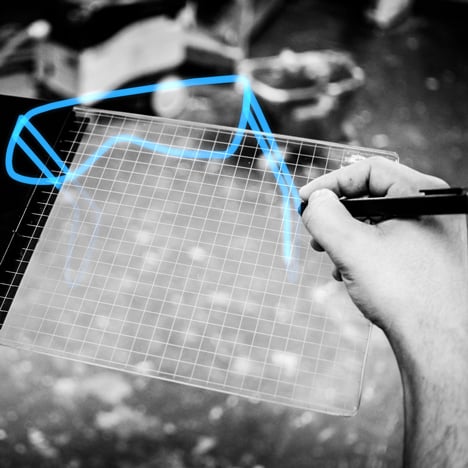