A chart-busting 128 skyscrapers over 200 metres tall were completed last year, 84 of which were in China, according to the latest industry research.

The annual report from the Council on Tall Buildings and Urban Habitat (CTBUH) has revealed that the number of skyscrapers is greater than ever before – making it the third record-breaking year in a row.

The total of 128 is a significant increase from 2015, when just 106 buildings over 200 metres high were completed, and brings the total number of these structures worldwide up to 1,168.

But China was by far the most active country for skyscraper construction in 2016, responsible for 84 – two thirds of the entire worldwide total. This includes the tallest building of the year, the 530-metre-high Guangzhou CTF Finance Centre.

In fact, more of these structures were built in Shenzhen than in any country besides China.

This marks the ninth year in a row that China has built more skyscrapers than any country.

And while some speculate that China's unprecedented building boom will start to slow down over the next few years, CTBUH predicts that the country will remain dominant in skyscraper construction for the foreseeable future.

"It's impossible to decouple the enormous boom in global skyscraper construction from the rapid urban development of China," reads the report.

"Additionally, over the past several years, there has been a major uptick in the amount of real estate investment coming out of China, rather than remaining within it," it continues.

"This, in combination with a still-cooling national economy, has caused some to assume that the nation's era of unprecedented construction is on the decline. While that may be the case in the long run, short-term prospects remain high, with 328 buildings in the 200-plus-metre range currently under construction in the country."

The Guangzhou CTF Finance Centre is one of 14 Chinese skyscrapers that make up the list of the 20 tallest skyscrapers of the year.

"It's safe to say that the role of the tall building in China will never truly fade; the only question that remains is how long it will continue to keep a majority share of tall building completions annually," reads the report.

"With the closest national contender, the US, in 2016 having only seven completions and China having 84, it's clear that the gap will take a number of years to close, if it ever does." 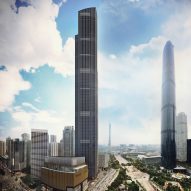 The organisation attributes this to "construction delays typical of buildings in this height range", rather than a slow-down in the demand for ever-higher buildings.

"We expect between 12 and 20 supertall buildings to complete in 2017, primarily in Asia and the Middle East," it said.

The report also reveals that 2016 was a big year for local record-breakers, with 18 buildings over 200 metres that became the tallest in their country, city or region.