A series of photographs snapped by Instagram users reveal the modular cutaways of the MahaNakhon tower, which Scheeren designed before leaving the Rem Koolhaas-led firm, and is now completing with his own studio Büro Ole Scheeren.

It recently topped out – becoming the tallest structure in the Thai capital, ahead of the 304-metre Baiyoke Tower II built in 1997. But it is expected to soon be overtaken by a residential tower also under construction.

The structure's most noticeable feature is the pixelated cutaway that wraps around the exterior of the tower like a ribbon. 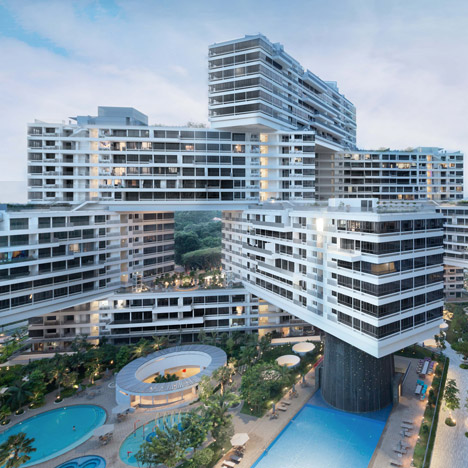 Scheeren's studio describes the structure as having been "carefully carved to introduce a three-dimensional ribbon of architectural pixels that coil up the tower's full height to reveal the inner life of the building".

The glazed volumes contained with this void, referred to as "glass skyboxes", are designed to provide occupants with indoor and outdoor living spaces that are well-suited to Bangkok's tropical climate.

They will include double-height spaces, boasting views over both the city and the Chaophraya River.

The pixelated volume is designed to "gradually dissolve" down to ground level, where the team is creating a landscaped public plaza.

The entire development will encompass approximately 150,000 square metres. Other additions include a shopping centre, restaurants and cafes, a 24-hour marketplace and a rooftop Sky Bar.

Scheeren left OMA in 2010, taking with him both MahaNakhon and The Interlace, the Singapore housing development conceived as "a blatant reversal" of tower-block housing. The Interlace was named World Building of the Year 2015.