A ring of benches is suspended from the roof of this glass-walled tea house, created by Atelier Deshaus beside a landscaped garden in Shanghai's West Bund.

Locally based Atelier Deshaus designed the tea house for a small garden plot adjoining the offices of a fashion brand.

The previously unexploited 110-square-metre yard contains a pair of staircases at either end that ascend to the office. It was transformed into a landscaped garden by July Cooperative Company.

The tea house stands against a wall in the northwest corner, shaded by the foliage of a large paulownia tree. Its L-shaped plan extends out from the boundary wall to enclose a small rear courtyard from which the tree emerges.

"This backyard functions as an outdoor room complementary to the Tea House," said the architects. "And the thick trunk of the paulownia, almost 90 centimetres in diameter, also becomes a lively actor of the space."

The main garden is entered through a gate at the opposite end from the tea house, where a path formed from irregular stones cuts through the mossy ground to reach the new building.

The tea house was built using a steel structure with 60-millimetre-square columns and beams that enabled the creation of an apparently light and transparent volume.

"While satisfying structural needs, this element could also have a chance to participate in the formal composition," said the team.

"It is the structural element and, meanwhile, it adapts itself to the scale of the furniture, thus establishing a close relationship with the human body."

Around the edges of the pavilion, the steel sections support a bench that crosses the threshold between inside and outside. Externally, it is suspended from the roof so it appears to hover above the ground.

A further cantilevered element above the bench projects slightly from the glazed walls to further enhance the connection between the interior space and the garden.

Above this, the roof creates a final cantilevered element, extending to cover an area of 40 square metres. The roof shelters parts of the garden as well as the interior, which has a floor area of just 19 square metres.

A suspended ceiling inside the pavilion conceals the structural beams supporting the roof, and creates space for integrating the lighting system and thermal insulation.

The black steel used throughout the building contrasts with warm timber flooring and joinery, as well as with the white-painted ceiling.

Ribbed glass is used for clerestory windows and incorporated below the bench seating, so it distorts the view of the garden from inside.

Atelier Deshaus is led by architects Liu Yichun and Chen Yifeng. Previous projects include a pavilion with a flower-topped roof balanced on sculptural steel supports and an art museum built around an existing industrial structure. 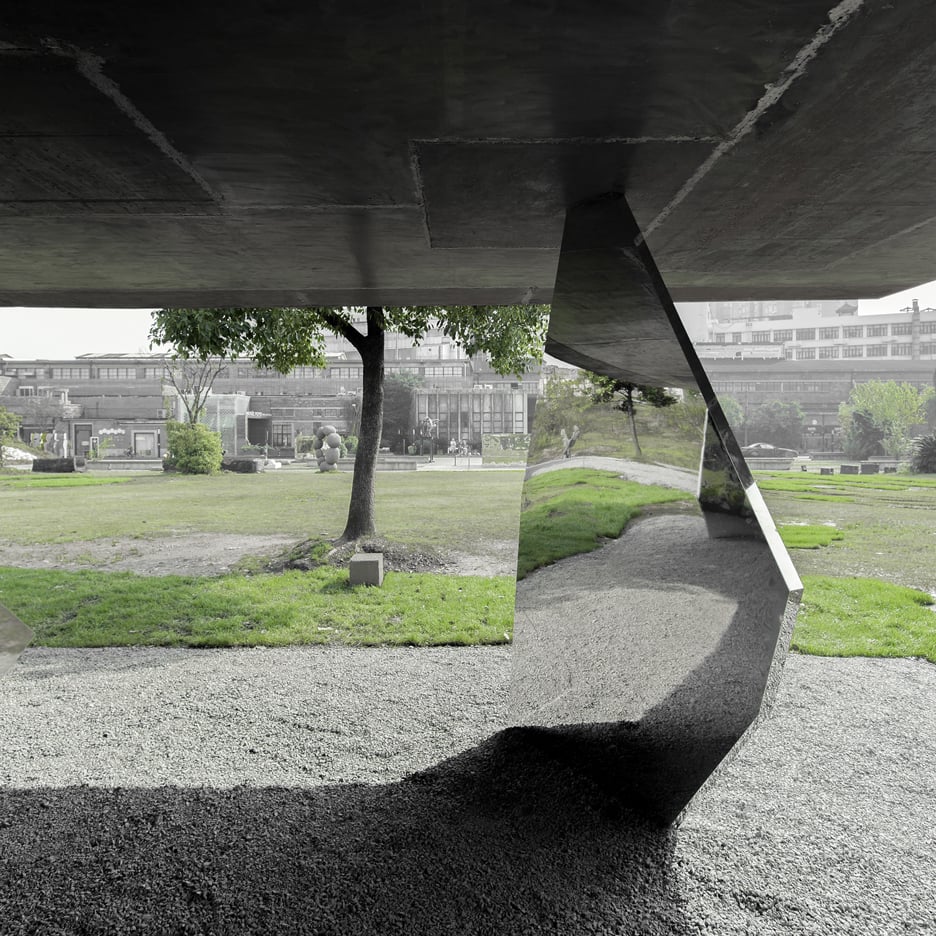 Photography is by Tian Fangfang.