Shepard Fairey, whose iconic posters supporting Barack Obama's 2008 election won him Design of the Year, has a new offering for this Friday's presidential inauguration.

The American graphic designer has applied the same posterised style and palette of red, beige and blue of the Hope imagery to three new designs, created for nonprofit organisation the Amplifier Foundation.

The organisation commissioned Fairey – who rose to prominence as a street artist – to create posters for use during president-elect Donald Trump's inauguration on 20 January.

His three designs, plus the work of two other artists, will be distributed as placards. They will also printed as full-page ads in the Washington Post.

A Kickstarter campaign to fund the undertaking raised $1.3 million (£1 million) in a little over a week.

While targeted at Trump, not one of the We the People series of images depicts the president-elect himself.

Where Obama gazed out into the distance from Fairey's 2008 design, now there are non-famous faces representing some of the USA's minority populations – Muslims, Latinos and African Americans. 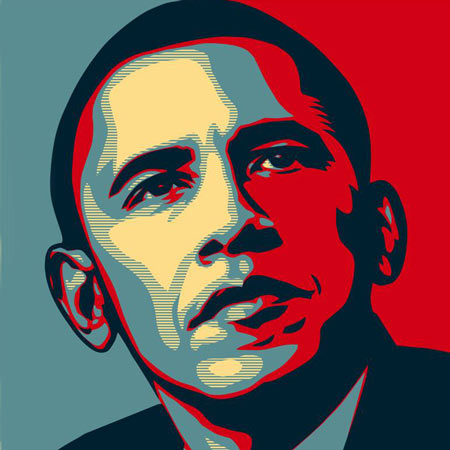 "Eight years ago, the artist Shepard Fairey made the iconic image that captured a period of hope in America," says the Amplifier Foundation on its Kickstarter page.

"Today we are in a very different moment, one that requires new images that reject the hate, fear, and open racism that were normalised during the 2016 presidential campaign," it continues. "So on inauguration day, We the People will flood Washington, DC with new symbols of hope."

Although originally produced without the authorisation of the Obama campaign, Fairey's Hope poster became the iconic image of the 2008 election.

The designer self-funded and distributed 300,000 stickers and 500,000 posters during that campaign.

"The Obama poster is a reminder of how extensively the design world impacts our everyday life," said Design Museum director Deyan Sudjic when awarding it the Design of the Year in 2009.

"The poster has become an international emblem of recent history."