In the second movie from our Bolon at Heart series, Annica and Marie Eklund explain how Bolon's design department works closely with its production team to create new woven flooring designs.

Led by sisters Annica and Marie Eklund since 2003, Bolon produces woven vinyl flooring from a factory located in a small town called Ulricehamn in Sweden.

The brand's design team is based in the same building, which creative director Marie Eklund describes in the movie as a "fantastic possibility".

"We just go down the stairs and there we are in the weavery," she says. "It is a fantastic possibility to have a design studio so close to the production."

"Marie and Annica are very much visionaries," she says. "They push the design team to think outside the box. A lot of creative work comes from them and we try to put it into product."

Once a new direction has been decided, the design team start testing and trying out ideas in the weavery.

"We collect a lot of imagery and work with mood boards," Lundblad says "When we know the feeling that we want, we start quite early to put the vision into sample."

"We get a lot of inspiration from just walking around the factory," she explains. "I love collecting things from glitches in the production – that's where we can find really interesting inspiration."

Bolon currently offers 10 different collections in a range of different colours and textures. In 2016 it also launched a personalisation service called Bolon by You, which allows architects and designers to create custom designs.

"You have over 400 different options," Lundblad says. "It's a really good way of working for designers and architects, because they are able to choose their own colours and patterns."

For 2017, the company is starting to experiment with incorporating other textiles, such as wool or cotton, into its woven vinyl designs.

Dezeen will be documenting the developments in more movies over the coming months as part of our Bolon at Heart series, which is exploring the brand's history, design and technology.

"Today Bolon is very famous for vinyl flooring, but we are very excited because we have started to weave with other materials that we have a really great passion for," Eklund says.

"We will cover maybe furniture, maybe walls. So we are very excited about our future."

This movie was filmed by Dezeen for Bolon in Ulricehamn, Sweden. All photography used in this story is by Dezeen, unless otherwise specified. Music is by Tobias Lindén of Fry Communications. 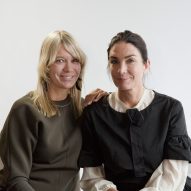