A coffee table based on the "restraint and detailing" of a bentwood box associated with Shaker folklife has launched at Maison&Objet, which begins today in Paris.

The table is based on boxes historically used by the Shaker religious sect to store kitchen ingredients and other small items.

"The Rodan coffee table is inspired by the restraint and detailing of the iconic Shaker box," said Pinch. "In line with the Pinch signature style, Rodan celebrates simplicity, whilst delivering on the detail."

The table has a solid wood base and tabletop. The top features a lipped edge, secured using the swallowtail technique, which gives it an overlapping, tapered join. The Shakers developed the technique to allow the wood to expand and contract.

Shaker furniture – which was made by a religious sect founded in England in the 18th century – is known for its minimal appearance, with the ladder-backed chair becoming a particularly notable design.

The process of making was considered an act of prayer, and the furniture was intended as part of a simple lifestyle.

Shaker-inspired furniture seems to be undergoing something of a resurgence in popularity, with New York hosting an exhibition of 32 designs shown next to the original artefacts they reference.

The "common sense" approach of the Shaker movement also inspired London designer Torsten Sherwood to create a range of wooden furniture, while Shanghai studio Neri&Hu have similarly modelled designs on the Shakers' "simple" and "honest" philosophy. 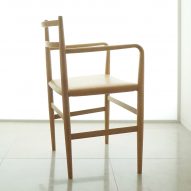 Rodan will be on show at furniture fair Maison&Objet from 20 to 24 January. Other projects on show at the fair include a range of cleaning and hygiene products by Tom Dixon, and a balancing light made up of monochrome spheres by Victor Castanera.