New York 2016: 11 international designers and studios have produced a range of simple furniture and homeware based on the American Shaker movement (+ slideshow).

As part of this year's Sight Unseen Offsite exhibition, the Furnishing Utopia showcase presented 32 new designs beside the original Shaker artefacts they reference.

The Shakers are members of a religious sect founded in England in the 18th century. They moved to colonial America and initially settled in Mount Lebanon, upstate New York, and became well known for their pared-back furniture and architecture. The designs were created to facilitate a simple lifestyle, and members considered making to be an act of prayer.

Notable pieces from the movement, which continued through the 19th century, included the ladder-backed chair and peg rail coat hooks.

"Often credited as the first Minimalists, the Shakers and their furniture have inspired countless Modernist and contemporary designers all over the world," said the Furnishing Utopia team. "Yet with their presence confined to just a few sites in the United States, people rarely have the opportunity to experience Shaker objects in person and in context."

The items created for Furnishing Utopia all follow similar design principals. Each designer or studio visited preserved Shaker sites at Hancock Shaker Village and the Mount Lebanon Shaker Museum, and used the archive of items during a workshop with the museum's curators. 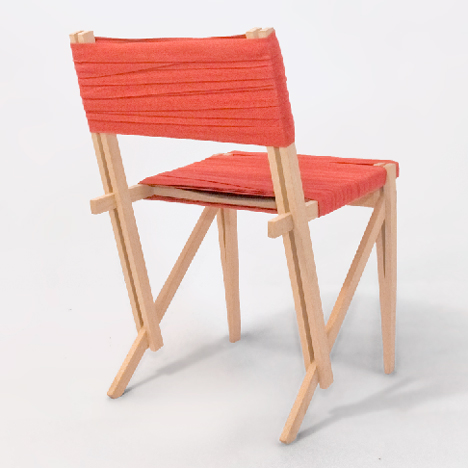 "Following the workshop, the designers were invited to produce designs that translate the ingenuity and aesthetics of Shaker objects into modern forms relevant to contemporary life," said the organisers.

The results included a series of three different-sized trays made from blackened ash wood by Denmark's Norm Architects, which can be hung on a wall.

Seattle-based Ladies & Gentlemen Studio created a desk with a fold-down front and a colourful woven stool.

Minimal baskets with curved corners and handles, a wooden trestle table and matching bench, and a pole-backed rocking chair were all created by Studio Gorm from Oregon. The duo has previously designed a Shaker-inspired furniture collection that pegs onto the wall.

Other small items include a wooden toolbox by Hallgeir Homstvedt, petal-like pouches by Gabriel Tan and a curved dustpan by Darin Montgomery.

Sight Unseen Offsite took place from 13 to 16 May 2016 on the 15th floor of Manhattan's Grace Building, as part of the citywide NYCxDesign festival.

Other highlights from the exhibition included a range of furniture made from pastel-coloured cement, and marbled chocolate packaging patterned by mixing watercolours and salt.

Neri&Hu and Torsten Sherwood are among others designers that have taken influences from Shaker furniture to create their own collections.