German footwear brand Birkenstock has moved into the bedroom, adapting the principles behind its famous sandals to a collection of beds launched at this year's IMM Cologne furniture fair.

Since the 1930s, Birkenstock has created orthopaedic footbeds by studying the anatomy of the foot and using natural materials and shape to stabilise it.

The brand has now broadened its focus to the entire musculoskeletal system. It claims the resulting bed systems, which feature a high level of elasticity and individual contouring, promote a more restful night's sleep.

"The Birkenstock principles for walking and standing are now being applied to lying and sleeping comfort," said the brand.

"Just as the Birkenstock footbed fits the natural form of the foot, the form of these sleep systems is attuned to the entire body," it continued. "Their exceptional support ensures healthy and restful sleep."

The brand created its beds based on research by Germany's Ergonomie Institut München and worked with the Austrian upholstered furniture manufacturer ADA to realise the project.

Its bed designs are built from three elements: a base, a dual-layered mattress and a surrounding frame.

Several of the bases feature undulating beech wood slats in different shapes for various body types. Another bed base features elastic discs that are made of cork, like the brand's shoes, and set on springs to relieve pressure on the body.

Mattresses range from wave-shaped to flat, and feature a support layer made of natural latex with granulated cork that the brand designed to be shock absorbent.

The support layer rests on a base layer of either natural latex, a cold foam made with plant-based oils, or a micro-pocket spring mattress. Three different levels of firmness are available.

The bed bases and mattresses are designed to sit in Birkenstock's new bed frames, of which the brand showed six models at this year's IMM Cologne. Their headboards feature more cork, as well as jute, leather and wool-felt.

Each one is named after a different city and styled to suit different interiors. The Sao Paulo version has leather piping, while the Montreal features a solid oak base patterned like the tread of Birkenstock's shoes.

For the Canberra design, the headboard is made from hand-sewn extra-thick leather that marks with regular use, and the bed frame is covered in fine wool felt.

A mix of real leather, loden cloth made from Tyrolean mountain sheep's wool and pure wood cover Maine's rounded headboard, while leather straps on the Montevideo and Iona create a way to store newspapers and other bedside reading material.

Established in 1777, Birkenstock recently had a renaissance on high-fashion catwalks. Designers like Yves Behar have contributed to its collections.

IMM Cologne took place from 16 to 22 January 2017. Products launched at the fair include a hybrid bed-desk frame by Pieter Peulen that helps students make the most of tiny living spaces and stools by Fabio Hendry and Martijn Rigters featuring patterns made from burnt hair. 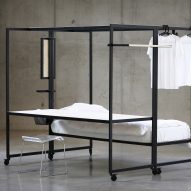