Van Herpen's Between the Lines collection, presented during this season's couture shows in Paris, focused on the gaps and sections between the materials making up garments.

Each of the collection's hypnotic designs were based on optical illusion patterns, which typically feature a palette of only black and white.

"By building up the patterns and then distorting them, the eye's perspective is tricked and challenged to see new patterns occurring in between," said the designer.

"Linear shifts and sharp contrasts form the base of this innovative approach to material development and pattern-making and challenge us to mind the system, but to find the gaps."

Among the 16-piece collection were garments with distorted monochrome patterns. Each of these pieces was made from synthetic fabrics hand-moulded into a three-dimensional shape.

Other pieces are made from Mylar fabric, which has been laser cut to create rippling patterns that expand and contract with the body's movements.

These are a continuation of the designer's collaboration with artist and architect Philip Beesley. The pair previously worked together to create 3D-printed dresses for van Herpen's Spring Summer 2015 show.

Shoes featured copper-plated heels that slanted diagonally. While make-up was kept to a minimum, each model's hair had been styled into a short, black crop with a harsh fringe.

For the set design, van Herpen enlisted the skills of Berlin artist Esther Stocker, who created a "tunnel of visual distortion" made up of lighting glitches and shadow-play.

Van Herpen studied fashion design at ArtEZ Institute of the Arts Arnhem, and interned at Alexander McQueen in London before starting her own label in 2007.

Her previous shows have included the use of robots to 3D-print and weave a dress over a Game of Thrones actress and suspended models in vacuums between plastic sheeting. 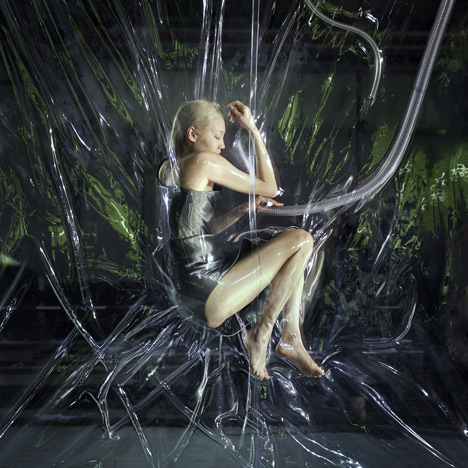 Photography is by Peter Stigter