This installation at London's Design Museum strips household appliances back to their basics to make operation easier for an ageing population.

It was commissioned for the New Old exhibition at the Design Museum, which asks designers to propose ideas that improve the lifestyle of the rapidly growing ageing population.

For their offering, Hecht and Colin explored the idea that digital technology intended to make our lives simpler doesn't necessarily aid older generations.

"As we age, we become less likely to navigate the conditions that shops and manufacturers require of youthful consumers," they said. "This puts the ageing population in an unfortunate position – abandoned at the exact moment when they need better products, increased assistance and servicing."

"Alienated by the speed of change in trade, manufacturing and technology, older consumers would benefit from a revolutionary domestic independence."

The Amazin Apartment is intended to remove the "worry and burden" associated with domestic upkeep by allowing companies to record and analyse the products in their homes.

Hecht and Colin describe the relationship between residents and companies as being "not too dissimilar" from that of the fictional Downton Abbey.

"Residents never see the services nor the staff moving between rooms because of a network of service corridors and utility rooms hidden from the more formal, public and private rooms," they said.

"The back side of the apartment wall is organised like an advanced warehouse, so that goods and services can be passed through, historically analysed and replaced as needed with minimal impact on the apartment."

The Amazin Apartment at the Design Museum includes three sections – a washing machine, a refrigerator and a water fountain.

The washing machine has a single button with one setting and is positioned at a standing height to avoid the need for bending down. The company carrying out the service would install large boxes of powder that last up to a month.

The fridge has two doors. On the residents' side, the left door houses new produce that has been delivered, which is then moved to the right side for consumption. On the service side, there is only one door for delivering the orders.

A water fountain allows a choice of filtered or branded waters to be plumbed in.

The Amazin Apartment is on show as part of the New Old exhibition at the museum's new location in Kensington and runs until 19 February 2017.

Other projects on show include a robot by Yves Béhar that helps older adults stay connected to the world, and a trolley bag that doubles up as a scooter. 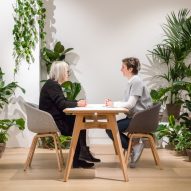