Canadian studio MacKay-Lyons Sweetapple has completed a coastal dwelling that features wooden shingles, gabled roofs, and concrete fins that elevate the home off the ground to protect it from tidal surges.

The Point House is located in Upper Kingsburg, a remote coastal town in Nova Scotia that overlooks the Atlantic Ocean. The area, known for its rugged coastline and historic properties, has become a popular holiday destination.

A dirt road leads to the holiday home, passing by a cottage and boathouse.

"This is a small project with a big address," said MacKay-Lyons Sweetapple, a Canadian studio led by architects Bryan MacKay-Lyons and Talbot Sweetapple . "It is surrounded by water on three sides, on a 45-foot-wide lot, on a point of land that was historically a small inshore fishing port."

Nearby are several modern, rustic cabins, called Shobac Cottages, built by the studio on the site of an old farming and fishing village. The collection of structures, including the Point House, suggest a "proto-urban" condition – a term used to describe prehistoric settlements.

The new home consists of a pair of simple, distinct volumes raised off the ground by concrete fins, which protect them from rising water levels.

The exterior walls and gabled roofs are clad in cedar shingles – a nod to traditional cottages. Bands of glass and irregularly placed windows provide views of the scenic terrain and bring natural light into the dwelling.

The residence has a parking courtyard, along with a wooden deck for lounging outdoors.

The main volume is entered via the terrace. The ground floor contains a kitchen and double-height great room. A large window in the southern corner offers sweeping views of the sea.

The sleeping quarters were placed in a loft.

Dark metal accents – including a large truss – provide a contrast to the exposed timber structure. "A set of black, steel totemic elements anchor one's experience of dwelling in the landscape," the team said.

The smaller volume contains a modest living room on the ground level and a bedroom and media den upstairs.

Other projects by MacKay-Lyons Sweetapple Architects include a boxy wooden house that extends over the edge of a rocky outcrop and a cabin for an architecture intern clad in weathering steel. In 2015, Brian MacKay Lyons was awarded the Royal Architectural Institute of Canada Gold Medal.

Photography is by William Green unless otherwise stated. 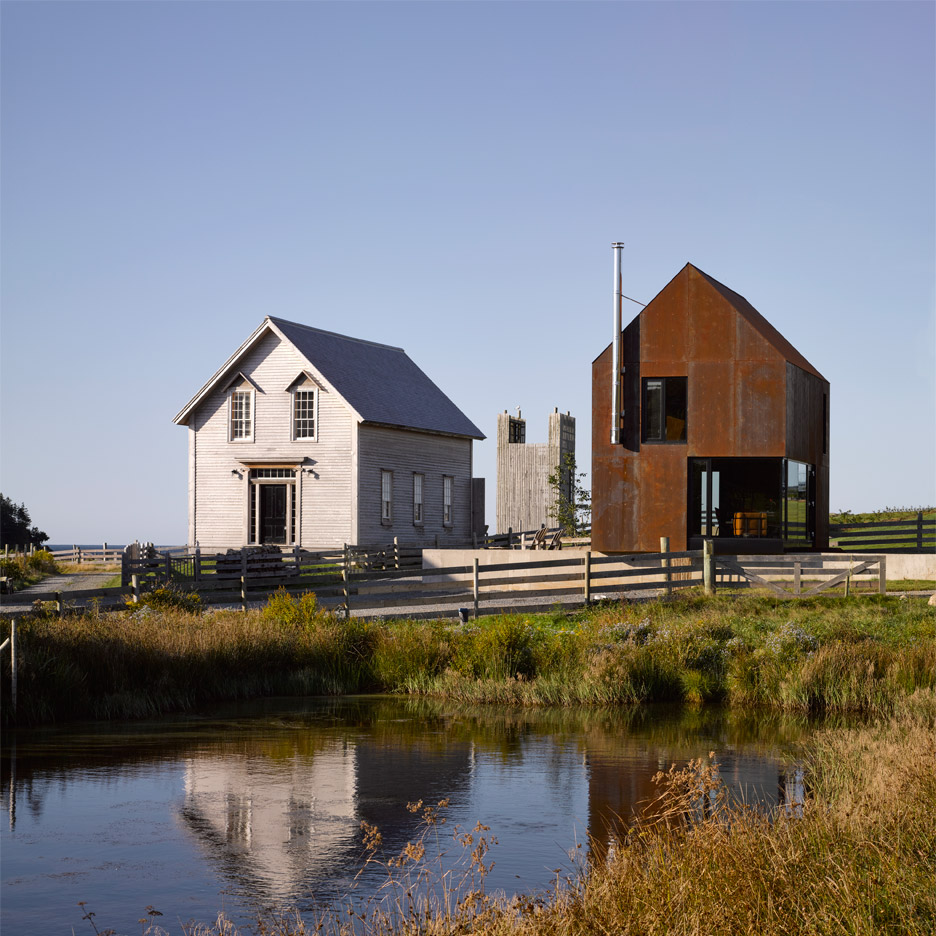