Adjustable furniture and sliding walls maximise the limited space inside this Hong Kong apartment, which has been overhauled for a photographer and his pet cat.

The client asked for a more fluid arrangement to allow him to adapt the space, depending on whether he is alone or with company.

Moveable furniture, concealed storage and sliding partitions give the option to use the home as a single space, or to divide it up into rooms.

"Flat 27A was an opportunity to bring a kind of subtle magic to our client's home. A powerful sense of pleasure and comfort that would set it apart for its simplicity, ease, and efficiency," said the studio.

"The micro apartment is no stranger to Hong Kong, where space is a premium, and although the concept has really taken off in the last decade when downsizing became trendy, the creation of smaller and smaller units continues to divide opinions."

Previously, the apartment has been subdivided to squeeze in two bedrooms, leaving a cramped and difficult-to-furnish living space. The architects decided to merge the bedrooms with the lounge to create one space.

In the lounge, the seat of the sofa slides out to reveal storage, while sliding partitions conceal shelves and the bedroom.

One concealed storage unit hosts a coffee machine and wine bottles, while others are used for camera equipment and spare furniture.

A pop-hole in one wooden storage units provides a retreat for the owner's white cat, which also has its own toilet concealed beneath the bathroom sink.

A custom-built dining table is set on casters to allow it to be easily repositioned, and can be expanded to seat up to 10 at gatherings.

"Nearly every surface conceals hidden storage and books, as the client is an avid photographer and travel buff with a massive library," said the studio. 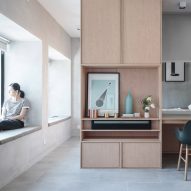 Photography is by  Hazel Yuen Fun.