Almost half of all architects working in London come from overseas, according to a survey of practices conducted for Dezeen.

The figures highlight the extent to which the architecture sector in the capital relies on foreign workers, with practices expressing fears over the implications of the Brexit vote on overseas staff.

"We rely heavily on recruiting from within the EU so there is a natural concern about how new working restrictions may affect our staff," one of the surveyed practices said. "Many EU employees are frantically trying to apply for UK citizenship as they are so concerned about their future status."

The survey, conducted for Dezeen by a network of human resources professionals working in the sector, gathered data from 20 small- and medium-sized firms around the UK, including 13 in London.

It found that 33 percent of architects in London firms come from either the European Union (EU), the European Economic Area (EEA) or Switzerland.

A further 12 per cent come from other countries. In total 45 per cent hail from abroad. Among London firms surveyed, the number of overseas architects is as high as 80 per cent. 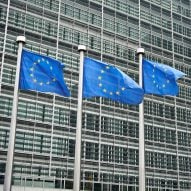 UK architects will still be able to pitch for public work in Europe after Brexit, RIBA says

The non-London firms surveyed are located in Belfast, Edinburgh, Reading, Bath and the Midlands. The firm based in Belfast reported that 73 per cent of its architects are from Europe.

The figures chime with data published last week by the Architects Registration Board (ARB) showing that 9,286 – almost one quarter – of the 37,999 registered professionals are either from EU countries or have overseas addresses.

In total, almost 16 per cent of architects in the UK come from EU countries, according to ARB's figures, while a further 8.65 per cent are registered at overseas addresses. Together these add up to just over 24.5 per cent of all architects.

Immigration was a key reason for the UK's vote to leave the European Union last June. So far the UK government has refused to guarantee the rights of EU workers based in the country and there are fears they may be asked to leave.

Architecture and design firms in the UK have expressed concern over how they will hire enough qualified staff in future. Tougher visa restrictions have made it more difficult to recruit from outside the EU in recent years.

While the government has repeatedly stated that it wants to continue to allow the "brightest and best" overseas workers to come to the UK after Brexit, there is concern that a drive to push down immigration numbers will hurt creative businesses.

Last week the government unveiled its industrial strategy, promising to put the creative industries at the heart of plans to revive UK industry.

However the 132-page document did not refer to directly to the country's architecture and design sector, which generates £71.7 billion in goods and services every year and employing more than 1.5 million people. 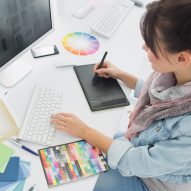 "I'd like to know how the government's recent identification of the creative industries as a pillar of post-Brexit Britain squares with the uncertainties around EU nationals working here now and in the future," said architect Amanda Levete.

Her firm, Amanda Levete Architects, was one of the practices that contributed to the survey conducted for Dezeen. Eighty per cent of architects at her firm are from abroad.

"Turning off the tap of talent coming to work here would be very damaging to our profession," Levete added.

Jane Duncan, president of the Royal Institute of British Architects, called on the UK government to "act swiftly to resolve the issue".

"Around one quarter of ARB-registered architects are EU citizens, and they make a substantial contribution to our vital industry."

The need for architecture and design firms to be able to hire talented overseas staff was one of the five points highlighted in Dezeen's Brexit Design Manifesto.