Philippe Starck has threatened to take action against a fellow French designer he accuses of spreading "false information" by passing off a 20-year-old concept for a smartphone as a new project.

The French designer sent out a statement denying he was involved in the project after seeing it published on design websites including Dezeen.

The phone, called Alo, was presented by Jerome Olivet and billed as a collaboration with Starck, who is one of the world's most famous designers.

However in his statement, Starck claims that he developed the phone 20 years ago when he was artistic director at French consumer electronics brand Thomson.

"Yesterday, Philippe Starck discovered in the media that a smartphone concept, created by himself in 1996 while he was Thomson Multimedia's artistic director, is today presented as a new co-creation with one employee of Thomson former team," Starck's office wrote in the statement.

"He would like to inform his friends in the media that this is not a new product and that, despite his pride to see a 20-year-old concept still viewed as revolutionary, he has new projects with new partners in mobile telephony and he doesn't consider continuing the development of this old model."

"In few words, it is false information disseminated by a person obviously looking for artificial buzz." 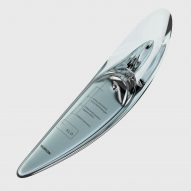 Alo is a concept for a cuttlefish-shaped smartphone with a gelatinous surface and a holographic display. It is listed as a past project on Starck's website.

Last week Olivet released images and text about the phone to the media, claiming he had co-designed it with Starck.

Asked to respond to Starck's statement yesterday, Olivet said the Alo had the longevity of Da Vinci's Mona Lisa.

"Leonardo da Vinci's Mona Lisa today is more than 500 years old and it always remains so beautiful and enigmatic," he told Dezeen. "Time does not count when the idea is good."

"I consider Alo to be an even more effective answer than 20 years ago," he continued. "Equipped with a powerful artificial intelligence and so amazing shape, Alo is the vision of tomorrow's smartphone."

Olivet intends to continue developing the design without Thomson and Starck. Starck's office said they will "oppose any misappropriation or recycling of his past work".

Starck is one of the most prolific living designers, and is best known for products including the Juicy Salif lemon squeezer and the Louis Ghost chair.

As artistic director of Thomson in the 1990s, he designed some of the brand's key products, including the fibrous Jim Nature television set and the conical Poe radio, a collaboration with Alessi.

Olivet, who specialises in product design for new technologies, was employed by Thomson during Starck's tenure. His previous designs include a collection of PVC bags featuring unusual forms. 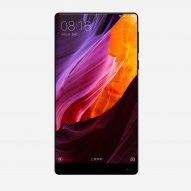