The Mi Mix is distinguished by its ceramic body and the near-edgeless display that covers 91 per cent of the phone's front surface area.

This means that a user sees almost no bezel surrounding their screen, a goal that was central to Starck's project with Xiaomi.

"We don't want pollution, we just want the image," said Starck in a video produced by the company. "I want to see the person I love, nothing else."

The celebrated French designer, while a vocal critic of screen culture, is an innovator when it comes to technology design.

He has recently worked on products ranging from a smart thermostat to cordless lights and electric bicycles.

Starck made the Mi Mix handset in polished black ceramic, which he describes as both the oldest and most contemporary of materials.

"It's incredibly strong, and it's warm," said Starck. "It's the same structure as jade."

To allow the screen to extend to the top edge of the phone, Mi Mix's front-facing camera is located on the bottom bevel, and the usual phone speaker is replaced by a piezoelectric ceramic driver that sits behind the display.

The Mi Mix also boasts a 4,400 mAh battery, meaning its battery life should be substantially longer than both that of the Apple iPhone 7 and the Google Pixel.

Xiaomi is one of the biggest smartphone makers in China, where the Mi Mix is expected to go on sale on 4 November 2016. 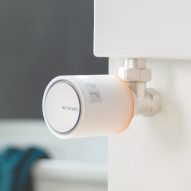 Starck spoke about the imperative to work with new technologies in an
interview with Dezeen.