Spanish architects Jorge Vidal and Victor Rahola have partially submerged this Catalan vineyard building in the ground, and linked it to the owner's house by a narrow tunnel.

The Mont-Ras Winery in Girona is built into the slope of the vineyard terrain, leaving just one facade and the top of its flat roof fully on show. The side walls are faced in terracotta brick that tones with the colour of the earth.

But beneath the flat grass-covered roof that disguises the building from one approach, barrel-vaulted ceilings and walls of board-marked concrete define wine-making zones.

"The building is a platform inside the earth," said Vidal and Rahola, who run separate studios in Barcelona. "Its roof is a garden that lies on top of the concrete volts, where optimised calculations have drawn a section of hyperbolic arches."

"The soil humidity helps the conservation of the wine," they explained. "We decided to [dig] the winery into the earth to keep it the ideal temperature and to create a platform for the existing house as well. The same earth is the one that helps us to create space."

Inside, the barrel-vaulted ceiling splits the 574-square-metre plan into four areas relating to the different stages of wine production.

There is a store for the farming tools used to maintain the vines, a space containing vats of freshly squeezed grape juice, another for vats and bottles that are resting, and a final area for tastings and storing bottles ready to drink.

The four primary zones occupy tunnel-like strips that run the full depth of the building.

Sliding and rotating shutters set into the facade looking out of the slope can be opened up to give views of the vineyard, while the subterranean area to the rear of each area is skylit.

A narrow small tunnel branches off from one corner of the building, providing the vineyard's owner with an easy link between home and work. 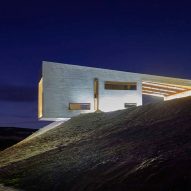 Valdemonjas Winery by Agag+Paredes projects from a hillside in Spain