Providing ample outdoor living spaces was a guiding factor in the design of this Northern California dwelling by American studio Malcolm Davis Architecture.

The residence in Silicon Valley – best known as California's tech hub – is located on a gently sloping and wooded site in the San Francisco Bay area. The design team sought to create a home that embraces its natural setting.

The designers worked closely with landscape architects Bernard Trainor + Associates to retain the existing trees on the site and to create an olive grove on the lower portion of the property.

A home that formerly stood on the site was dismantled, and its materials were reused in the construction of the new dwelling.

"Instead of demolishing the original house, the design team opted to carefully dismantle the home in order to salvage lumber and other materials, with salvaged material repurposed back into the home," the studio said.

The main dwelling is shaped like an H, resulting in two exterior courtyards that provide "all of the rooms multiple exposures and connections to the landscape".

Clad in cedar boards, the facades are shaded by deep roof eaves with white soffits. Ample glazing, including floor-to-ceiling windows, provides expansive views of the terrain.

Glass doors lead to several outdoor spaces, such as a pool terrace and a fire pit. "A generous south-facing covered porch faces the swimming pool," the team noted.

Concrete elements, such as exposed columns and an outdoor staircase, are intended to subtly refer to a historic cistern on the property.

"An important design move was preserving a 100-year-old, above-ground concrete cistern, a remnant of the site’s agrarian history," the studio said.

Inside, the home contains four bedrooms, an office, a family room and an open-plan living and dining area. White walls are paired with wooden ceilings, and flooring made of wood and concrete.

Sustainability was an important consideration for both the client and the architect. In response, the design team incorporated "time-proven solar concepts" such as southern exposures, solar shading and cross ventilation.

"Other sustainable features included a greywater recycling system, as well as photovoltaic panels that produce electricity and heat both the domestic hot water and pool," the firm said.

Other projects by Malcolm Davis Architecture include an off-the-grid California retreat clad in weathering steel and topped with sloped metal roofs. 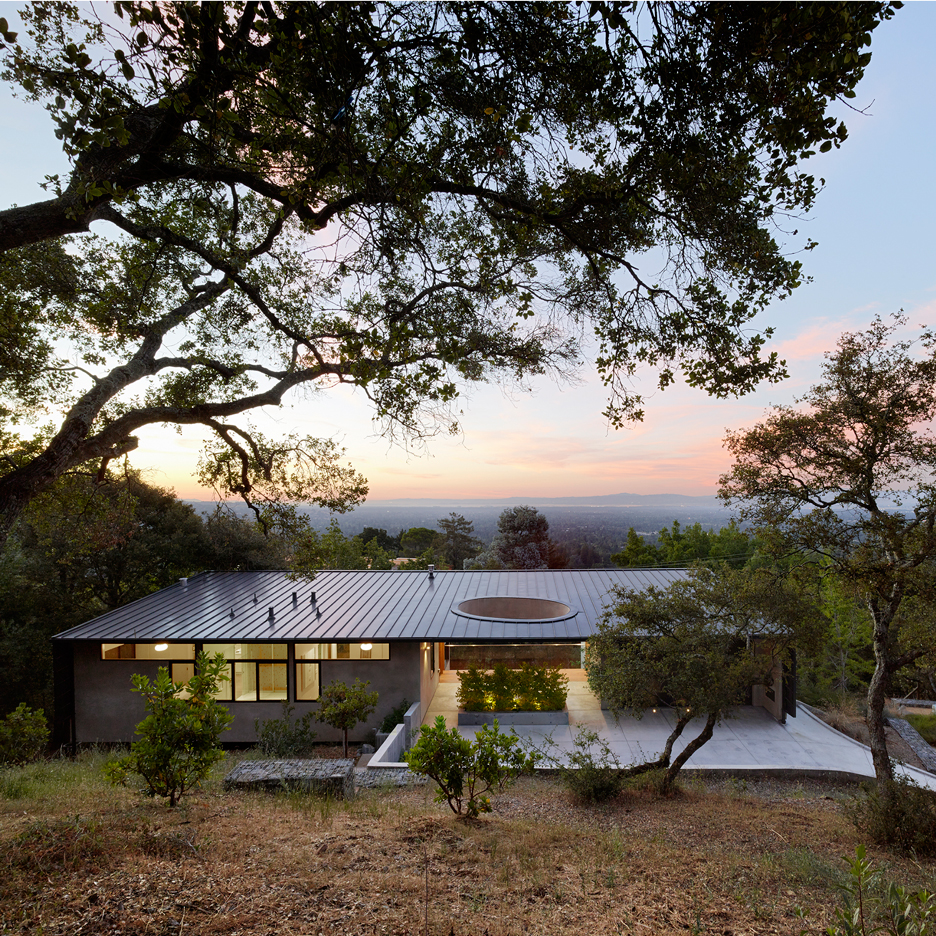