Dutch architects Gwendolyn Huisman and Marijn Boterman designed this skinny house in Rotterdam for themselves, incorporating hidden windows into the black brick walls and adding a large indoor hammock.

The architect couple designed their three-storey SkinnyScar house to occupy a narrow gap of measuring just 3.4 metres wide and 20 metres deep between residences in an old Rotterdam neighbourhood.

The house's proportions, which are narrow and long in relation to its height, provided a structural challenge for Huisman and Boterman who wanted to create light and lofty spaces.

Two parallel reinforced concrete slabs run vertically inside the house, bearing the load down to the massive foundation. This enabled the architects to create large openings in the front and rear facades.

The blackened-brick facade is intended to complement the brickwork of neighbouring housing, which dates back to the 19th and 20th century.

"The modern house has its own identity with modern details, but still highlights the history of the small gap in the urban context," said the architects.

"The project transforms a conventional and traditional way of living and is fitted to their inhabitants as a custom-made suit," they continued.

Similarly, when Dutch architects Nina Aalbers and Ferry in 't Veld designed their own home between a pair of existing properties in Rottermdam they chose contemporary brick to reference its neighbours.

Perforations in the facade cover three windows that are set back from the street-facing side. These "hidden" windows only show up at night when the rooms inside are lit up.

Two large bay windows slightly extend from the front to let the inhabitants sit and watch people passing by.

Inside the house, plywood boxes are used to encase each of the concrete columns and cluster functions suited to the living spaces that they serve.

These include the kitchen and storage for the dining room, book shelves for the library and living room, and the bathroom and wardrobe for the bedrooms.

The volumes are left detached from the walls to allow for views in between different spaces that are located on either side, with views towards the street and the rear garden.

"The architectural concept stresses a natural division of living spaces that merge together without harsh boundaries, where the spaces are always connected horizontally and vertically," said the duo.

"By placing the volumes and staircase near the centre of the house, intimate living spaces appear towards the public street and collective courtyard garden," they added.

A large skylight runs along one wall above the main staircase. On the last level, where the stair cuts through the centre of the boxes, the treads open to allow light to flood through.

Living spaces are placed on levels suited to their use during different times of day. A spacious entrance and kitchen area occupies the ground floor, featuring high, folding doors that the couple will use to open up the entire interior to the garden during the weekends and evenings.

The living room and library, which are mainly used in the evenings, are on the first floor overlooking the garden and street.

On the living room side, a large void above is used as a hammock facing a window over the garden and sky. The deep bay window on the other side provides a place to sit and read.

Bedrooms and bathrooms are set on the final floor. A skylight above the bathtub is intended to offer bathers views of passing clouds and birds, as well as to bring natural day light into this darker zone of the house.

Natural and simple materials are used throughout the residence, including epoxy-coated cement screed floors and rough cast in-situ concrete floors.

These are left unfinished on their undersides to reveal the construction method across the ceiling of the level below. Rust stains, caused by the wet season in which the concrete was cast, are also left untreated.

The trend for skinny houses originated in space-short cities in Japan but has now started to become popular in other countries, with examples popping up in Vietnam and Spain. One of the slimmest – a 122-centimetre-wide property is to be found in Poland. 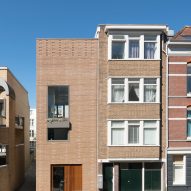 Photography is by the architects unless stated otherwise.