The Swedish architects transformed the buildings, once home to Beckmans College of Design, with dark walls and custom furnishings to make the creative space called Alma.

They worked together with the company's co-founder Fredrik Carlström and CEO Anna Behring Lundh, who have a strong vision for Alma's look and feel. Taking its name from the Latin term alma mater, meaning school or university, they aim to make Alma into an institution.

"We have have used solid materials, and quality in each instance, avoiding gimmicks and more temporary design solutions," Alma co-founder Fredrik Carlström told Dezeen. "We want to build an institution."

In a similar vein to the global members club network Soho House, Alma provides a mixture of working and socialising spaces for its card-holders to network.

The 2000-square-metre space in central Stockholm is actually two buildings of five floors each. In between them is a glass-roofed atrium with two floors.

Flooded with natural light during the day, the atrium is home to a restaurant managed by chefs Martin Brag and Leo Frodell of Ett Hem. It is filled with long, communal tables and also has space for exhibitions and events.

The smaller rooms in the buildings either side of it are darker spaces, intended to have "a warm, homely feeling", according to Carlström.

They include formal and informal meeting rooms, breakout spaces, and areas for working solo or collaboratively.

"We wanted it to be a warm and welcoming place, where our members and their ideas feel comfortable, inspired and a little spoiled," Carlström said.

"We also created 'friction points' where we encourage collaboration."

In addition, Alma is home to a shop, Austere, an outpost of a concept store founded by Carlström in New York in 2014.

Carlström now intends to launch the stores in Europe, where they will sell furniture produced under the Austere brand as well as a curated selection of other goods.

The store will also sell furniture created specifically for the Alma space.

Among the custom objects is Tham & Videgård's w171 alma light, produced by Wästberg. Able to be hung as a pendant or fixed to wall, the flat disc is shaped into waves that help to diffuse light.

The architects also created tables, benches and drawers, which have been produced by Swedish manufacturer Sjölinders.

Other pieces in the space include a mobile light installation designed for the atrium by Kasper Friis Kjeldgaard, a sofa by Carlström and Erik Järkil, and tableware by ceramist Richard Palmquist.

A herringbone pattern is used across Alma's floorboards and tiles, adding consistency from room to room.

While it opened its doors at Nybrogatan 8 in October 2016, Alma was spotlighted during Stockholm Design Week earlier this month, when Austere launched its first collection, named Arrow.

Dark interiors emerged as a trend during the event, as global political instability was said to be driving homeowners to "nest". 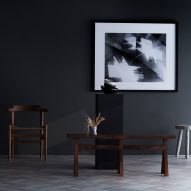