Morphosis has refurbished guest rooms at a hotel in Vals, Switzerland, where the US firm has also proposed a controversial skyscraper beside Peter Zumthor's famed spa building.

Morphosis, the studio founded by Pritzker Prize winner Thom Mayne, was one of four tapped to revamp rooms for The House of Architects at 7132 Hotel – a luxury retreat located in the secluded Swiss village.

The property includes a 130-room hotel built in the mid-20th century, as well as the Therme Vals spa that is considered one of the most important works by Swiss architect Zumthor.

Zumthor and Japanese architects Tadao Ando and Kengo Kuma have also created rooms for the resort.

Morphosis conceived two room designs, both of which entailed creating a sense of comfort and refinement within a relatively small, rectangular space.

"The renovation of a series of guest rooms with a given size and structure involved a re-examination of the definition of luxury," said Morphosis, which was founded in 1972 by Mayne, who received the Pritzker Prize in 2005. The firm has offices in Los Angeles and New York.

"We turned to the reduction and refinement of elements – focusing on scale, colour, tactility, unexpected form and connections to the natural context."

Every aspect of the room – from the lighting to the wash basin – were custom designed and fabricated.

The designs were heavily influenced by the surrounding terrain.

In the stone-themed rooms, the grey walls and floors are wrapped in local stone, which varies in colour, cut and texture. Oak panels in the wood-themed rooms were made of trees harvested from the nearby Graubünden forests.

"Wrapping visitors in locally sourced natural materials, the rooms draw inspiration from the incredible mass of alpine rock, earth and greenery of the surrounding Valser Valley," the team said.

A simple white bed, an elongated black headboard and a black storage unit were placed in each unit. A large sliding glass door opens onto a terrace, providing a strong connection to the outdoors.

At the heart of each room is an illuminated shower made from hot-bent glass, which was designed by Morphosis and fabricated by the Barcelona company Cricursa. White or yellow dots embedded in the glass provide a sense of privacy.

The shower is meant to serve "as an abstract sculptural object that stands in glowing contrast to the room’s natural surfaces". 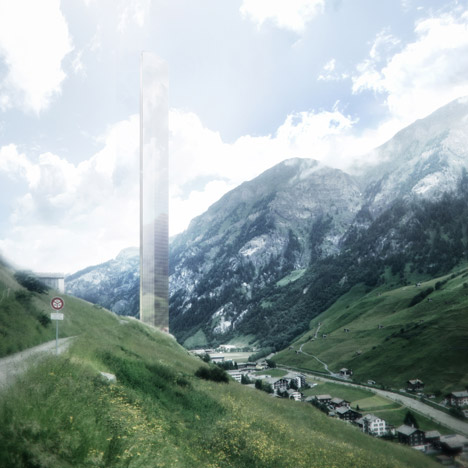 Morphosis is also designing a new hotel for the property that will contain 107 guest rooms.

The design, which sparked outrage with Dezeen readers when it was unveiled in 2015, calls for a 1,250-foot (381-metre) tower meant to blend with the mountain landscape and offer panoramic views. A podium will link the tower to neighbouring buildings and will house a restaurant, spa and other amenities.

Morphosis was commissioned to design the hotel following a controversial competition process, which saw the jury distance themselves from the appointment.

Photography is by Global Image Creation.