Now the Stockholm Furniture Fair has ended, we're reflecting on some of the most promising talent spotted during the event.

Stockholm Furniture Fair, one of the biggest international events on the design calendar, took place at the Stockholmsmässan exhibition centre from 7 to 11 February 2017.

The regular exhibitors – such as Hay, Carl Hansen, Vitra and Wästberg – were joined by a number of young and emerging designers in an area called The Greenhouse.

Read on for our picks of the best ones:

Vancouver studio Knauf and Brown is made up of D Calen Knauf and Conrad Brown, who met in 2001 through a mutual interest in skateboarding.

At the fair, the duo presented a collection that won them the Rising Star accolade at the Editors' Choice awards, which included a credenza with a bamboo skirt as well as a lamp modelled on seafront homes in northwest Canada.

Find out more about Knauf and Brown ›

HAHA Studios was founded in 2015 by Arash Eskafi and Yu-Ching Chiang, who met while studying for a masters in industrial design at Konstfack in Stockholm.

Echoing the approach of established brand Wastberg in the main section of the fair, the studio focused on both standard and non-electric lights in its first collection. But it was the smile-like table and pendant lamps, which feature two bulbs connected by a curved tube of anodised and sandblasted aluminium, that were the standouts in the collection.

Find out more about HAHA Studios ›

Studio Kaksikko is a partnership between Helsinki-based designers Salla Luhtasela and Wesley Walters, who specialise in woodwork and ceramics.

The pair presented their Maissi Bench, which was inspired by old stair handrails and industrial machinery parts, and features curved elements formed by laminating thin strips of oak in cylindrical moulds.

Find out more about Studio Kaksikko ›

Leskelä, who was simultaneously presenting her work at the Aalto University exhibition, displayed her Puffin seating collection at the fair.

The chairs, which she says are inspired the "Bauhaus aesthetic", feature a leather back and seat that can slide off and be replaced.

Find out more about Maija Leskelä ›

Westlund and Wik presented their Oas sofa as part of Beckmans College of Design's office-themed exhibition.

Its simple wooden frame is upholstered in a piece of carpet, which features a swirling blue and green pattern based on a calm oasis.

Find out more about Ella Westlund and Hanna Wik ›

The outdoor lifestyle that living in Sydney has afforded Tom Fereday helped inform the furniture range he showed in Stockholm. Created for new Australian brand SP01, his collection features chairs made from thin, overlapping metal wires that curve to follow the shape of the body.

Fereday founded his studio on 2012 and focuses on using materials and the environment "as a positive design constraint".

Find out more about Tom Fereday ›

Barcelona studio Toru presented its Clop lounge chair, which designer Jordi Ribaudí based on the "simplicity of a clog shoe".

Its simple form is made from a wooden stool and a thick piece of folded leather that creates the seat's back.

Find out more about Toru › 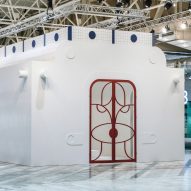