The winners of the Editor's Choice awards at this year's Stockholm Furniture Fair were a multilevel stand by Kinnarps, a flexible seating system by Blå Station, and the work of young brand Knauf and Brown.

The awards, which were handed out for the second consecutive year, were judged by a number of editors from prominent European design titles.

Together, the jury decided on the fair's Best Stand, Best Product and Rising Star – each of which received a statue designed by Swedish designer Lisa Hilland.

Office furniture company Kinnarps took home the Best Stand prize, with the jury commenting on it's "bold, clear and intelligent" design, which was realised by Johan Ronnestam and Förstberg Ling.

"A stand at a trade fair is all about branding. You have to take a complex message and make it really simple and understandable. The Kinnarps stand does this in a bold, clear, intelligent way."

The Best Product accolade went to a modular sofa named Bob, which was designed by Bernstrand & Borselius for Swedish company Blå Station.

The Bob sofa is made up of small seating modules that can be arranged in a multitude of ways to suit different layouts.

"A clever idea that produces a flexible seating system with a strikingly simple aesthetic," said the jury. "A new modular typology that could work equally in the home or in commercial spaces."

Vancouver studio Knauf and Brown was recognised as the fair's Rising Star with its "mature and sophisticated collection" that the jury believed showed great potential.

Its collection was on show in the Greenhouse area along with other emerging designers. It included a credenza with a bamboo skirt as well as a lamp modelled on seafront homes in northwest Canada.

The Stockholm Furniture and Light Fair is on until 11 February. 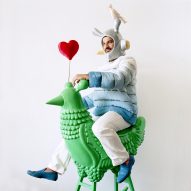