Canadian design studio EMarchitecture has renovated one of the homes in Habitat 67, the iconic brutalist complex in Montreal by architect Moshe Safdie that celebrates its 50th anniversary this year.

The two-storey apartment was overhauled by interior designer Maria Rosa Di Ioia of EMarchitecture, who collaborated closely with her design-minded clients, Byron Peart and Stefan Weisgerber.

"When they bought the condo it had been demolished to bare bones, so they were able to re-create an interior from scratch," she explained.

The concrete ceiling was the only interior feature retained from Safdie's original design, which was presented at the 1967 World Expo in Montreal as an experiment in modular housing.

Comprising 354 stacked concrete "boxes", the 12-storey complex includes 158 homes and is considered an example of the brutalist architectural style.

In 2014, Safdie – who features on Dezeen's Hot List – explained how he used Lego to design the groundbreaking housing development during an interview ahead of his 2015 AIA Gold Medal win.

The residence renovated by EMarchitecture is laid out on two levels. The upper storey contains a living room that is open to the kitchen below and accessible up an open-tread staircase.

The ground floor contains the kitchen, bedroom, and an office that could be converted into a second bedroom.

"The apartment has been designed to respect the original cubic structure of the building, while encouraging a seamless flow through dedicated rooms," said the designer.

The condo also enjoys an expansive terrace that is accessible via the kitchen or bedroom, or living room.

Habitat 67 is well-known for these outdoor spaces, which are made possible by the building's seemingly haphazard arrangement of stacked cubes.

A solarium was added to the apartment's terrace in 2014, creating a secondary dining space that is still useable during Montreal's cold winters.

In reconfiguring the home's layout, the design now centres around the kitchen – aiming to provide a social and functional space.

"The nexus of the apartment is the double-height kitchen space," said the property's owners. "Floor-to-ceiling picture windows offer spectacular views of the Old Port and the Habitat building itself."

The home is currently listed for sale by real estate group Engel & Völkers. Its current asking price is CAD$1.3 million (£793,000).

Other renovated apartments in Montreal include a white rooftop extension by local studio Naturehumaine and the restoration of a suburban home, throughout which the architect made particular efforts to preserve "nicks and scratches" left over time. 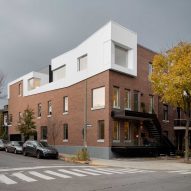