A driverless electric race car that could "open a new dimension" in motorsport has been revealed at this year's Mobile World Congress in Barcelona.

The autonomous Robocar, manufactured by Roborace, uses a number of technologies to "drive" itself. These include five lidars (like a radar, but using light from a laser), two radars, 18 sensors and six cameras.

Its sleek and "styled" form was conceived by Daniel Simon, the automotive designer who has created vehicles for Hollywood sci-fi blockbusters including Tron Legacy and Oblivion.

Simon's predominantly carbon-fibre design weighs in at 975 kilograms and measures 4.8 metres long and two metres wide. It is powered by four motors and a single battery and will be capable of speeds over 320 kilometres per hour. 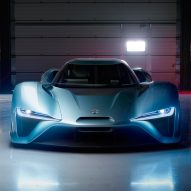 "Roborace opens a new dimension where motorsport as we know it meets the unstoppable rise of artificial intelligence," said Simon.

"Whilst pushing the boundaries of engineering, we styled every single part of the Robocar. We take special pride in revealing a functional machine that stays true to the initial concept shared."

Billed as the world's first car of its kind, the company describes the release of Robocar as an "advancement in driverless electric technology".

It provides an open-source platform for racing companies to develop their own driverless vehicles, with the ultimate goal being that all teams competing in Roborace will use the same Robocar software.

According to the company, the vehicle will be used at a self-driving racing championship that will take place before the Formula E Mexico City ePrix later this season.

Speaking ahead of the announcement, Roborace CEO Denis Sverdlov described the reveal as a "huge moment" for the company, which has been testing its development cars, known as Devbots, for some time.

"It was very important for us that we created an emotional connection to driverless cars and bring humans and robots closer together to define our future," he said.

Eventually, the company hopes its innovations would be applied to normal road cars, making "passenger and commercial vehicles safer".

This view is shared by Tesla founder Elon Musk, who has previously said driving is too dangerous for humans and will be outlawed as soon as self-driving cars are proved to be safer.

The US Department of Transportation also backed this argument last year when it unveiled plans to eradicate road accidents by increasing the number of autonomous vehicles.

The Mobile World Congress 2017 takes place in Barcelona from 27 February to 2 March. Also at the event, Nokia announced its bestselling 3310 is making a comeback, complete with the game Snake. 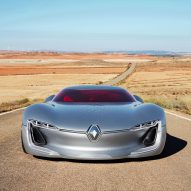 Photography is by Daniel Simon