Danish architecture studio BIG is designing a road, air and hyperloop-capable autonomous vehicle for the new US city of Telosa currently being planned for five million people in an unconfirmed desert location.

The Ground to Air, or G2A, would constitute a rhomboid passenger pod that can attach to a set of wheels to become a car, rotor blades to become a helicopter, rails to form an elevated train or run underground in a hyperloop system.

The plan was revealed by a Bjarke Ingels Group (BIG) architect leading the Telosa mega-project at a recent introductory town hall event held in the Brooklyn Museum that elaborated further elements of the project.

"We got very excited, we were talking about autonomous cars and then we were like, 'we should make our own', so we did," BIG associate Alana Goldweit told the audience.

"We were looking at all these different technologies and we said, 'why has no one just put all of these together?'"

The system would move at different speeds depending on its mode, with higher speeds when running in mass-transit formats.

"The G2A combines the efficiency of mass transit with the convenience of personal transit – lowering urban congestion while increasing accessibility," Goldweit told Dezeen via email.

"The pods would move at lower-speeds at-grade, navigating streets shared with pedestrians. When elevated, they can hit high-speeds moving along elevated maglev guideways – or platooning as a hyperloop underground." 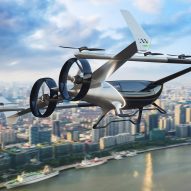 BIG announced last September that it is master planning Telosa, a city planned from scratch in the desert.

The brainchild of billionaire entrepreneur Marc Lore, Telosa is expected to grow from nothing to a population of around five million spread over 150,000 acres in the next 40 years.

One of the features of the city will be its complete use of electric, driverless vehicles.

The businessman, who made his fortune in online retail, has said he wants Telosa to trial a "new model for society" based on an economic concept he has branded "equitism".

This is where the city land is owned by a community foundation and sold off as it appreciates in value, with the proceeds used to fund further development and public services without a need for increased taxes.

"The problem with capitalism is land ownership," Lore told the meeting. "What if the land were owned day one by the foundation, by the people? And it only really works if the land doesn't have value [to begin with]."

Autonomous aspects "very easy" to do

"There are things we can do with a clean slate that it's very hard to do in an existing city, like for example fully autonomous vehicles and transportation allows you to create a much safer environment for pedestrians," Lore told the town hall.

"There are advantages that technology affords us today that are just too hard to implement in an existing city because the real hard part about autonomous vehicles is combining your driving cars with autonomous vehicles," he said.

"If you were to build a city that's fully autonomous it's actually very easy and we can do it with not a lot of effort or investment."

Goldweit added that the exclusive use of autonomous vehicles will mean Telosa has no kerbs and no parking spots, with cars instead stationed in automated pods stored underground.

"It's really starting to declutter the city and use design to create really refreshing and inviting spaces," she said, adding that these decisions would make Telosa more accessible for people with limited mobility.

Other details about BIG's plans for Telosa were also disclosed at the meeting alongside new renders.

For instance, the city will have a large park weaving throughout like a "central spine".

"When you're in a city like New York, everyone wants to be around Central Park right, that's the place to be," said Goldweit.

"In Telosa, we took that park and we wove it throughout the city so more people […] would have frontage to that green space, and people being able to escape the density of urban life and be a part of nature is really key to making people within Telosa feel like they're in a whole new place." 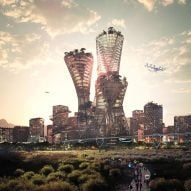 Ten futuristic cities set to be built around the world

In addition, the layout of the city will move away from the centralised downtown area common in conventional urban centres.

Instead, there will be 36 dense, multi-use districts each designed to meet 15-minute city principles, meaning all daily amenities and workplaces are within a 15-minute walk.

Other landmarks – such as the Equitism Tower skyscraper, museums and stadiums – will be spread out along the spinal park rather than concentrated in a small central area.

Telosa's organisers have emphasised its focus on sustainability, with engineering firm Buro Happold appointed to support that work.

The city is planned to send zero waste to landfill, run entirely on renewable energy, use 92 per cent less water per person than conventional cities and grow 20 per cent of its food locally.

"When you're in the outskirts of the city, all you would read is wind turbines and [photovoltaic] panels and greenhouses because you're growing all the food and you're producing all the energy right on site," said Goldweit.

Though the location of Telosa has still not been confirmed, Lore revealed that the search for a site has now been narrowed down to three states – Nevada, Utah and Arizona.

Lore's ambition is for 50,000 people to move to Telosa simultaneously before the end of 2030 to populate the city, a process he compared to a university move-in day.

This aspect of the project attracted controversy when Lore said in an interview with USA Today that these first Telosans will be subject to a selection process.

Appearing to respond to the criticisms, he said at the town hall: "What we decided is that we're going to [...] build a diverse sort of class of 50,000 people across different age groups and race, religion and income levels and seed the city with 50,000 people, so day one it's a vibrant, diverse city, and then you have to just let it grow organically from there."

"So it's not a controlled city, it's not closed, it's meant to be fully open," he continued. "But in order to seed it and ensure that it's got the best chance of being what it can be, we think it's important to do that."

"Now how we do that is very challenging, and that's why we're going to be leaning on a very diverse group of people to think that through because we can't get that wrong."

Telosa is among a number of new technology-oriented cities being planned across the world. Also among these is a recent plan put forward by Saudi Arabia to build The Line, 170-kilometre-long and 500-metre-tall linear city.

The images are courtesy of BIG/Telosa.