Nokia is exerting its nostalgia power with the return of the iconic 3310 mobile phone, but are readers enthusiastic about owning a 17-year-old handset? Find out in this week's comments update.

Blast from the past: the bestselling Nokia 3310 mobile phone of the early 00s is making a comeback, but its new look has received a mixed response from readers, with some saying it lacks the charm of the 2000 original.

"This kind of compromise will satisfy no one," wrote Jon. "People who appreciate the aggressively bare-bones nature of a true dumbphone will see it as somewhat lacking, and the people who appreciate technological nostalgia will find the looks too alien from the original."

But James disagreed. "This phone plugs a gap. It is for the festival goer, the holidaymaker who doesn't want to run the risk of losing an expensive phone," he wrote.

"Too long has it become the norm for companies to create high end looking goods that are updated every year. How about maybe we should aspire to buy fit-for-purpose consumer goods that meet our everyday needs?"

One reader can't wait to grab himself a bargain:

Game of phones: Nokia's announcement had the Dezeen team reminiscing about the handsets of years gone by, and commenters have also been chiming in with their favourites.

"No Motorola StarTech? Best phone ever," said HeywoodFloyd, while KuriousOranj favoured the No Ericsson T10/T28. "This was, without doubt, the coolest phone to be seen using with your black Powerbook G4 around 2000," he wrote.

"I am 93.4 per cent certain that if you show the Nokia 7280 to this generation they'll think its a vape and try to smoke it," wrote regular commenter Kay.

One reader expressed regret over the lack of variety in the current market:

Tall ambitions: readers are decrying a crop of skyscrapers proposed to boost business for Paris after Brexit, which include a design by British firm Foster + Partners.

"Utterly bizarre how much Paris seems to struggle with elegant skyscraper design and construction that is congruent with the city's identity," wrote Jon.

"The most provocative aspect of this project is that the architectural discourse behind this is thin like a cigarette paper," said Kim. "It is just a pastiche without political and design substance."

"More of an insult to Safdie," wrote Kay.

"While interesting, it completely overwhelms Sirius," wrote Nathan. "But this isn't a proposal that was intended to be built."

However, this theory was debunked by Clinton Cole of CplusC Architectural Workshop, the firm behind the proposal: 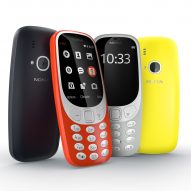