Flip phones, lipstick phones, mango phones – the announcement that Nokia may be reissuing the iconic 3310 mobile phone has the Dezeen team reminiscing about the handsets of years gone by.

From the fruit-shaped oddity that was Nokia's 7600 to the flippable Motorola Razr, these are the classic cellphone designs that hold a special place in our hearts.

Mobile phone design went a bit mad in the early 00s as manufacturers, feeling threatened by the rise of mobile gaming consoles and a slew of innovations from new entrants, tried in vain to find a new form factor to replace the old candy-bar shape.

The mango-shaped Nokia 7600, one of the maddest, was a cross between a handset and a gaming controller, with a screen in the centre and buttons on either side, meaning you needed to dial with both thumbs. Dezeen founders Marcus Fairs and Rupinder Bhogal both briefly had this phone.

"I was given one of these by Nokia and I actually used it until product designer Richard Seymour laughed at me and shamed me into getting rid of it," said Fairs. "It had some good points: the screen was large and colourful and the carry strap was genuinely useful."

When it launched, the 3310 became a much-loved classic thanks to its long battery life, resilient casing and collection of features including the game Snake. At the point of its retirement in 2005, it was – according to Nokia – the world's bestselling phone, having sold 126 million units. We all had it.

"My first phone love was the 3310 with a pink cover," said Dezeen Watch Store's Liz Swinton. "I got it in year 11 and it connected me to the world."

Having already been successful in the business market, Nokia targeted young adults with the Nokia 5110. Users could change its covers, making it one of the most fashionable phones of its era, according to Dezeen editor Amy Frearson.

"Everyone I knew either had one, or wanted one," she said. "I had one with a metallic turquoise cover that I was really proud of."

The 5110 was also one of the first handsets to feature the game Snake, helping Nokia to become a pioneer of mobile gaming.

The Motorola Razr was released in 2004 and became one of the company's bestselling phones of all time. It was distinguished by its slim profile and keypad formed from a single sheet of metal.

"I carried a different brand of clamshell in the 00s, but I lusted for a Razr," said deputy editor Rima Sabina Aouf. "It was the height of sophistication in its day. I still miss the satisfaction of hanging up on somebody by snapping a flip phone shut."

The 7280 "lipstick" phone was managing editor Olivia Mull's first choice. It featured a spinning disk in place of a keypad, and a screen that faded to a mirror when inactive. Adverts for the phone were directed by fashion photographer David LaChapelle, and the device had a cameo role in the Pussycat Dolls' Beep music video.

"I really wanted a Nokia 7280 but it was actually totally impractical," said Mull. "It had no keypad so it would have taken ages to text. Apparently Nokia didn't market it for regular use though but as a second 'night phone' – probably not quite right for a 12-year-old girl."

Although Dezeen's studio director Ben Hobson had a Motorola Razr, it was the R1 that he really wanted.

When it launched in 2008, it had a price tag of approximately £1,200 due to its innovative design that saw the phone swivel in the middle to open out and be ready to use.

Featuring a large, clear screen, a central scroll and a qwerty keyboard, the Blackberry seemed like a big improvement from other products.

"It was my first phone with internet and a camera, as well as instant messaging app BBM, and was probably the last phone I had where I could choose the colour," said reporter Eleanor Gibson, who owned one in red.

A number of Dezeen team members owned an 8310, but sales director Wai Shin Li loved his so much that he presented it to his class at school as his "best friend".

2005 saw the release of Nokia's 3250, which featured a unique twisting design that transformed the phone keypad into a camera when turned 90 degrees, and music control keys at 180 degrees.

Reporter Alice Morby was particularly fond of this phone, as it could store up to 500 songs. "It was an upgrade from my Sony CD Walkman, plus nobody at school had it – it scored me automatic cool points," said Morby. 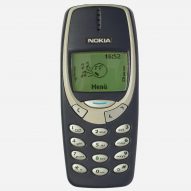