Architect Jon Danielsen Aarhus designed this pine-clad cabin in rural Norway for his own family, creating a large glazed living area with mountain and lake views.

Located between Oslo and Bergen, the cabin named Hytte Ustaoset is situated 1,066 metres above sea level at the foot of Hardangervidda – one of the largest mountain plateaus of its kind in Europe.

Oslo-based Aarhus, wanted to make the most out of views from the house towards a lake in the plateau, as well as ensuring that the structure sits well within its natural environment.

Concrete pillar foundations raise the timber structure above the sloping bedrock and vegetation, while pine-wood cladding on the walls and roof are designed to grey over time and mimic hues found in the surrounding trees, rocks and greenery.

"We wanted to build the cabin around the view, so to speak – the view is the principal theme of the building," Aarhus told Dezeen.

"At the same time we wanted it to sit well in to the landscape, using natural materials that would blend in," he continued.

A large window provides the open-plan living, kitchen and dining area with a grand vista. Inside, an angled ceiling is intended to emphasise the view.

"With this view in mind; the idea for the main room was to create the experience of being outside – exposed to the shifting scenery," Aarhus explained.

"To achieve this, the entire view-facing wall is made of glass. The ceiling is tilted, attempting to 'explode' the room even more."

The tilted ceiling, in combination with the glazed wall, is also a reference to the gapahuk – a type of improvised shelter used when hiking in Norway. The traditional structure features two posts with a horizontal log on top, and a layer of branches leaning on it, making a makeshift roof and leaving one side of the structure open.

A bench is built into one side of the space with storage cabinets on top. Next to this, a walkway leads through to the bedrooms and the bathrooms, while an attic provides storage space.

Inside, light-toned pine wood is used to cover the walls, ceilings and floors, and polycarbonate panels in the doors let light seep through. Due to the rural locations, all of the materials were brought in by helicopter.

To ensure his family can use the cabin all year round, the architect designed the residence to withstand Norway's harsh winters. 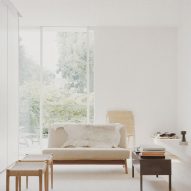 The pitched roof of the cabin is slightly wider than the main volume of the house below to provide shelter at both the rear and the front.

"The eaves are generous to keep frost, falling from the sky at night, away from the windows – which can be a problem with insulating glass at certain temperatures," explained the architect. "As no windows open, the eaves also conceal openings for ventilation."

The roof also covers the main entrance, which the architects placed toward the dominant wind-direction to keep it clear of snow. This will accumulate on the opposite side of the building instead so the windows here are placed high up.

A previously existing cabin of 29-square-metre cabin now functions as an annex, and together with the new cabin creates a sheltered outside space.

Other rural cabins in Norway include a blackened timber cabin Lund Hagem designed to withstand harsh winters and a holiday cabin by Rever & Drage's holiday residence that frames views of a Norwegian fjord. 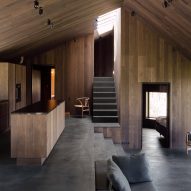 Photography is by Knut Bry.